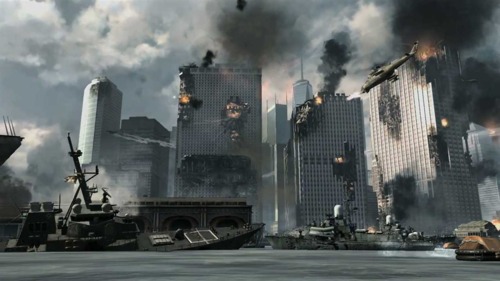 There’s a sense that games are more exploitative in a way that The Hurt Locker – which also was designed as form of entertainment – isn’t. I think they are an art form, and I think that ‘too soon’ criteria is not applied to things like Green Zone. Or United 93. There will be a time when we look back and find it quaint that video games were so controversial. I think the active ingredient to changing that attitude is time.”

[…] The producers didn’t create The Hurt Locker as a public service; they did it to tell a story that they thought needed to be told. It was a piece of entertainment that they sold. And, yet, that’s not viewed as exploiting current events. It’s viewed as somehow artistically interpreting and commenting on current events. The creative process of making that movie and making our games is very similar, but they’re received differently.”

Hirshberg is right, of course. How can we not see similarities between the realistic character driven film, and a game that involves both hijacking a nuclear sub and a snowmobile chase?