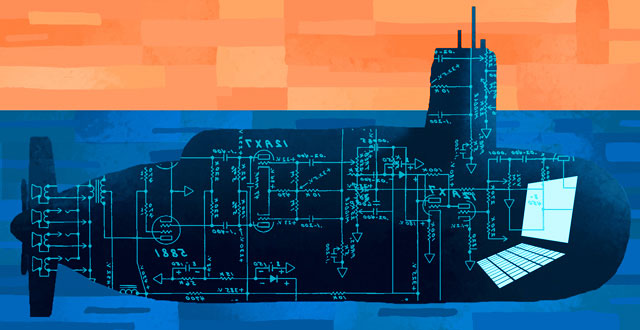 In 2006, a Chinese submarine surfaced within torpedo range of the aircraft carrier U.S.S. Kitty Hawk off the coast of Okinawa without being detected. In 2010, the Cheonan, a South Korean boat, was sunk by a torpedo fired by a midget sub. These events reminded us that submarine warfare isn’t just an outdated picture from the Cold War period.

Anti-Submarine Warfare (ASW) has always been a core mission area for the U.S. Navy, and DARPA’s current contribution to this exhaustive task is its brand new sub-hunting drone: the Anti-Submarine Warfare Continuous Trail Unmanned Vessel (ACTUV). In order to enhance its operational capabilities, DARPA released in early April a freely downloadable, crowdsourced simulation developed by Sonalysts (Dangerous Waters), the ACTUV Tactics Simulator. Basically, you sit down into one of the ACTUV configurations and trail unknown subs hanging around the American coasts, and practice actual evasive maneuvers.

This stuff isn’t for the average player. Liking The Hunt for Red October and Das Boat isn’t enough. You won’t exactly replay the Action of February 9, 1945, where a sub of the Royal Navy sank a German U-boat that was prepared to deliver highly sensitive technology to Allied forces. Instead, you will have to comply with maritime law and the International Regulations for Avoiding Collisions at Sea. Yes, serious games are … serious. Moreover, they are hard, ugly, and boring. This one reminds me of sub sims from the end of the ’90s; except that in Silent Hunter, you actually were in a sub.

As there are several ACTUV configurations—and therefore various difficulty levels and differences in gameplay—the Analysis Team suggests that we move on to a more difficult mode. Funny, because playing with the easiest one is already a pain in the ass. Do not believe those who claim in the forum that there are a lot of possibilities in this sub sim, beyond the stated Antisubmarine Continuous Trail objective. From what I saw, you just wait (a very long time) for signals.

As you complete each mission, you will be asked if you want to submit your gameplay data to DARPA’s database. By analyzing your results, DARPA may discover optimal tactics to be implemented in the ACTUV prototype.

The ACTUV program is a great military issue. The present ASW capabilities possessed by the U.S. Navy are still based on skills developed for Cold War threats. The goal was combating Soviet nuclear submarines: they were huge, noisy, and found navigating in deep waters. A piece of cake to locate, track, and trail. But today, the U.S. Navy has to cope with the proliferation of stealthy diesel-electric submarines, against which the passive sensors and old tactics are quite ineffective. Indeed, if the total number of active submarines in the world has fallen since the end of the Cold War (between 1945 and 1991, approximately 950 were built by the USA and USSR, and there are fewer than 400 across the world today), the number of countries operating small conventional submarines has increased. Although slower, they are quieter, cheaper, and because of their smaller size, can operate in littoral waters that camouflage their acoustic signature.

In addition, they can be equipped with Air Independent Propulsion technology that provides them with a greater independence of atmospheric oxygen, and therefore increases their performance. The problem with the spread of these modern subs is that they provide their owner with an asymmetric advantage. They could limit the undersea battle-space awareness, represent an anti-access threat, and even disrupt maritime commerce.

And so DARPA has initiated the ACTUV program with three main objectives. First, it wants to create a device that runs without anyone stepping aboard at any point in its operating cycle. Unlike other unmanned vessels, the ACTUV is designed for global independent deployment for months at a time. Second, DARPA wants to demonstrate the technical viability of its system. Third, it wants to combine the device with new sensors so that the ACTUV may be used by the Navy. The shift into using unmanned vehicles in a wider range of missions represents a transformational change for undersea warfare. The degree of autonomy is the major hindrance to actual UAV developments. In this case, it will reduce the communications demands and the operator workload, and free the crewed ships from the burden of shadowing submarines for days.