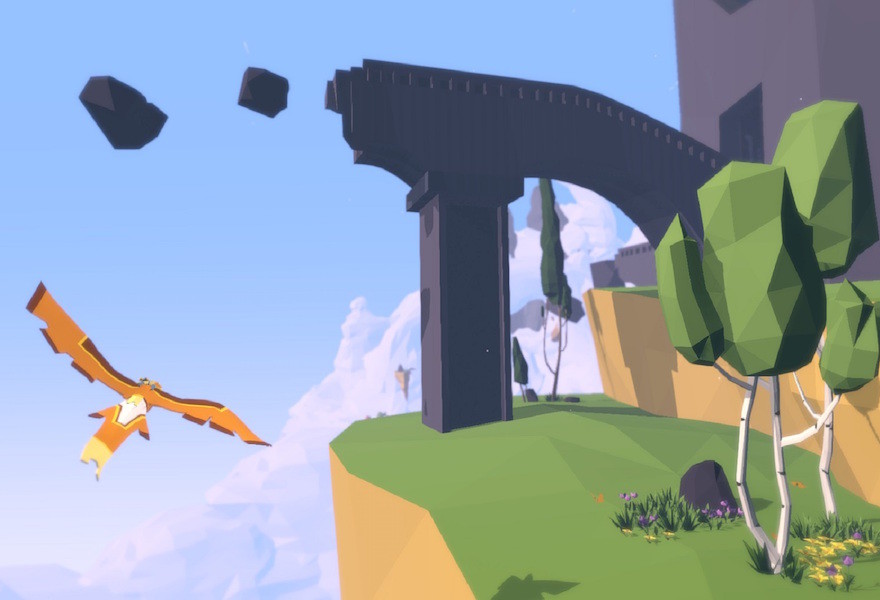 Last time we saw cubist flying game Aer, its bird girl protagonist Auk was left quivering, alone and scared, in a distant ruin. She had just been threatened by a large monster, one she had met before, only soon afterward finding herself surrounded by ominous blue spirits as an ethereal crescendo swelled up around her. As the game’s newest trailer resumes her journey, however, this unsettling tone is set aside, instead introducing us to the friendlier side of the game’s world.


When the trailer opens, we briefly find Auk in what appears to be the same temple as last time, praying to a statue and receiving a lantern in return. Suddenly, the music swells from stoic majesty to freeform enthusiasm as Auk transforms into a bird, and like a loftwing from The Legend of Zelda: Skyward Sword (2011), begins to soar across her homeland of scattered floating islands.

On her way to the next temple, the loneliness of previous trailers is broken as she meets a group of people huddled around a campfire, makes friends with a few sheep who are so enamored with her that hearts fly out of their bodies, and meets what appears to be a stone lion who tells her about someone named “Priestess Karah.” Even the spirits from the last trailer seem to be back, their menace now gone as they help guide Auk on her journey.

Again, like in The Legend of Zelda, Auk must still overcome her own share of dungeon-delving and puzzle-solving, as she uses her lantern as well as various ancient devices to reactivate the magic of long forgotten ruins. But unlike the isolation of her last dungeon-crawl, she is no longer alone in her quest. Her world is lived-in, and though occasionally frightening, exudes more than enough warmth to compensate.

However awe-inspiring exploring Skyward Sword’s Skyloft or Wind Waker’s (2002) Great Sea can be, part of what makes them so memorable all these years later is the colorful cast of characters who call them home. Aer seems to have learned this lesson well, complimenting its breathtaking flights and idyllic natural paradises with friends cheering the player on and giving them a reason to explore. There is danger, yes, but it is undercut by beauty and joy. This time around, no monster joins Auk as the trailer ends. Only the wind, the sun, and the sky.

Aer is set to release sometime in Fall of 2016. You can keep up with the game’s progress over on the developer’s Twitter and Facebook pages, as well as on their YouTube channel.