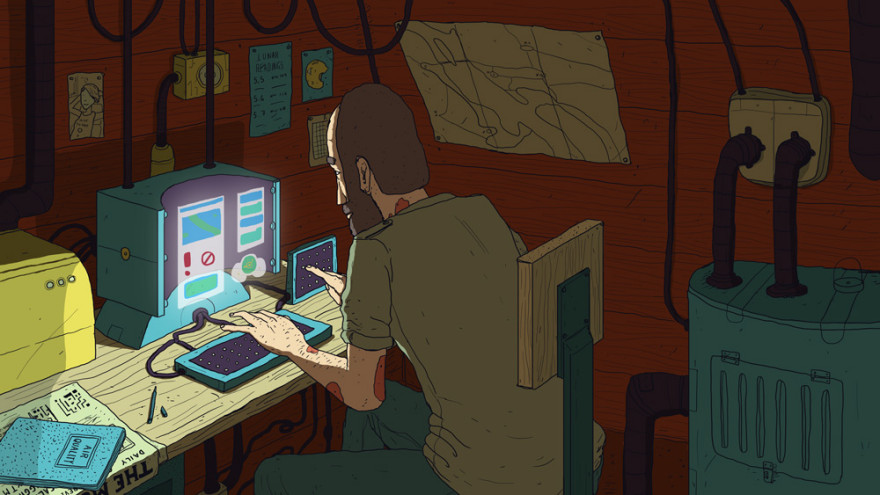 Comic books and videogames have always been artforms that have a lot in common. Both have their origins as niche mediums of entertainment, initially derided by outsiders as socially corrosive and absent of cultural merit, only to eventually be later accepted as a part of popular culture. So it’s no surprise that they would intersect and influence one another.  For Laurent Hrybyk, a Baltimore-based animator and cartoonist, the commonalities between the two are without question. “They both tell stories using visuals more than words,” he says, “so videogames, comics, and movies will always have that bond.”In Sam The Alien, a point and click adventure comic series created by Hrybyk, readers follow the misadventures and exploits of a swashbuckling extraterrestrial after he crash-lands in the middle of a desert on Earth after an intergalactic chase. There he meets Randall and his daughter Ruby, plagued by a terrible smog-induced disease as they seek out a cure. The three survivors band together in a quest to overcome their mutual hardships and seek out a better life.

Hrybyk got the idea for the interactive comic after chatting with fellow illustrator and animator Chip Wass. “He was looking through the story and design of the first few scenes of Sam,” he said. “At that stage the story of Sam had text and dialogue. He questioned if I really needed any dialogue at all—the scenes and items themselves tell more of the story than the dialogue ever would. That’s when everything kind of clicked. That’s when I made the connection to Myst and really thought about that style of storytelling.” Myst was a formative game experience for Hrybyk as a child, with its emphasis on exploration and environmental storytelling through puzzle-solving. After playing through Sam’s first proof-of-concept episode, it’s not hard to spot the resemblance.

Hrybyk aspires to successfully combine the visual narrative of comics with the interactivity of games, triumphing over what he would describe as the stagnancy of recent digital comics. “Most digital comics are very similar to print comics, but that doesn’t hold up aesthetically for me,” he says. “With a print comic there’s a tactile and visual experience holding the book in your hand that is impossible to replicate on the screen. I think that’s because I tend to crave a different kind of visual stimulation when looking at the screen, such as movement.”

However, Hrybyk feels that relying too much on animation distracts from what the experience of what reading a comic should be, as a story primarily told across panel illustrations. That challenge of balancing between static content and dynamic delivery is what he’s attempting to tackle in Sam the Alien. “Sam is my attempt to tell a story with interactivity, but using it as a storytelling device to set the reader’s pace, or bring them closer to a particular moment. It’s difficult. There’s no real rules or guidelines to follow.  Which is also pretty exciting now that I think about it.”

The central theme at the heart of Sam’s story is loss and of overcoming it, a theme not so far removed from Hrybyk’s own life. “While developing the initial stories that would become Sam, there were two unexpected and very sudden deaths in my family that happened within one week of each other. It was hard to think of anything funny at that time. It made me re-examine everything, not just the story. I took a break…a step back.” When he eventually returned to writing the project, the overall arc and the character of Ruby were the products of this experience. Though Sam’s story is not one without its moments of solemnity, Hrybyk promises that the comic will not suffer for a lack of his characteristic brand of surrealistic humor.

Hrybyk is currently running a Kickstarter for the first collection of Sam’s adventures. If successful, the following episodes would focus on the disappearance of Ruby’s mother and explore locations such as Earth’s moon. He’s openly expressed however that, regardless of the campaign’s outcome, he’s committed to seeing Sam the Alien to completion. “This story will be told, If not funded then it might be a slower rate, but that’s okay with me.”

You can download and play the demo for Sam The Alien through the game’s website and kickstarter page.