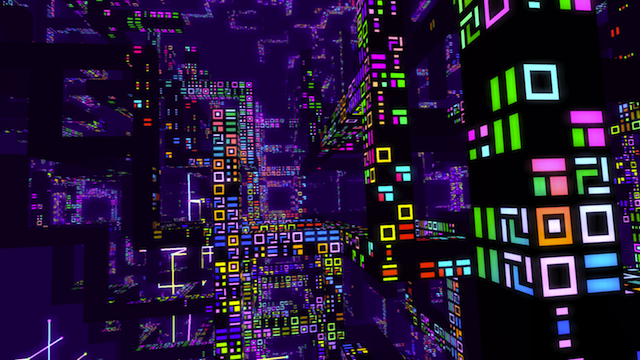 Nowhere is about, well, I’m not exactly sure. The last time I heard of the game, back in spring, it had a cyberpunkish, post-singularity vibe. That was alpha 54. The new trailer has gone beyond that, showing cities of the future transformed into growing, biological detritus. Maybe what we’re looking at is the outskirts of cyberspace, but who knows. Just imagine your favorite Trapper Keeper as a kid and you’ve pretty much got it.

Whatever Nowhere is, it’s not likely to be the same a few months from now, as the game has been one long, strange trip of radical iteration. It actually started out as Project Ginshu in 2012, a series of rapid prototypes in tribute to Alexander Shulgin, the batty grandfather of the club drug ecstasy. The first games were no more than simple puzzle-platformers, but, as you can see, the neon-outlined polygons of the early days have grown in scope and majesty since then. The studio say they plan to have their chemically-induced sandbox completed by 2015, but we suspect development to be fully taken over by autonomous bots before then.