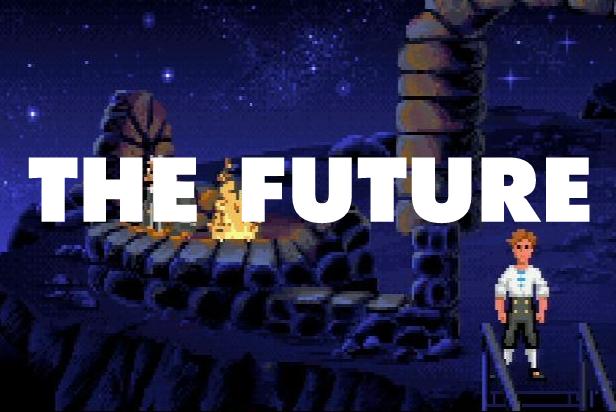 by Jason Johnson and Jamin Warren

When LucasArts shut its doors for good last week, Dave Gilbert, one of the brightest minds in adventure games today, had this to say about it:

“It was like someone who you were childhood friends with a long time ago, but haven’t spoken to in twenty years, and sometimes you think about them, but you have no real desire to pick up the phone and call them, and then, you find out that they died.” I said it was more like learning a distant elderly relative had passed on. We both laughed and agreed these were terrible, depressing analogies.

We were on the phone, talking adventure games.

Jamin had previously spoken with Tim Schafer, head of Double Fine, and Dan Connors, CEO of Telltale, in separate interviews. So we thought we’d take the opportunity to publish the words of these stewards of modern point-and-click. What we came away with was a semi-definite account of the state of adventure games. Turns out, all’s well and fine.

So adventure games are stuck in the past, right?

Dave Gilbert (The Shivah, Blackwell Series): The problem with adventure games right now is that we have to always ask where they are right now. Nobody asks where platformers are now, or where are shoot’em-ups, or where are 16-bit style Japanese RPGs. These are all genres that are old and coming back. Adventure games are a part of that. They’re so broad. They’re just another medium of telling stories. It’s a good framework to hang an interactive story on. I don’t think it needs to go anywhere. The classical style tends to stick around because it works.

Tim Schafer (Monkey Island, Grim Fandango, Broken Age): It has to be point and click. To me it has to. I feel like it has to be solvable by someone who’s not dexterous. That was an unspoken contract. You can sit and think, without having to have good reflexes. You can scratch your chin. That’s the most important gesture. Your dad can play. I’m too stressed to play an online first-person shooter. I don’t think fast. I like to stand and think about a problem with secret layers of meaning and make connections that weren’t obvious. Like, “Whoa, I’m so smart.”

Dan Connors (CEO of Telltale Games, The Walking Dead): There’s so much ground to cover. We can build a world that people can get in and make choices as their favorite star or a historical figure. You can still have shooting. You can do that too. Why limit in terms of what it could be. This industry is based on new ways of doing things. We started at Pong and went to Half-Life. Why would anyone say this is that?

Okay then. How are they changing?

Schafer: A thing a lot of games have moved away from is that to solve them required a broader understanding of the world. If you had to trick a guard, you had to know the guard’s motivation. You had to know what guards are like. They drew on the outside world. One extreme example in Ghost Town. You had to know how to make gunpowder. Where can I get sulfur? I’d look in an encyclopedia. Nowadays, it’s all on the screen. We can put more on the screen. Everything is there.

“A lot of games have moved away from a broader understanding of the world.”

Connors: One of the best things is we know about telemetry data, how the audience feels about any character. So, in episode two of The Walking Dead, you can feed six of the characters. Then, we knew from that what people were thinking subconsciously. Everyone said Duck and Clem. We can go to another level because we have this thing that’s growing and morphing. The magic is in creating an environment that’s all audience-based.

Gilbert: The focus is more on making the games themselves enjoyable. I think that is a place adventure games are going. The Walking Dead is a great example of really great games that have no puzzles. The puzzles that are there might as well not be. You just want to get on with the story. I think we should stop thinking about them as adventure games and start thinking about them as just games, or ways of telling stories.

My philosophy as a designer is if a player has to leave my game to enjoy it, then I’ve failed.

I really hate not knowing what to do next. How do you deal with that?

Gilbert: Being stuck in an adventure game is not fun. Back in the day, yeah, you’d be stuck for a month. The only way I could beat that wizard at the end of King’s Quest 3 was beg my parents for their credit card and order the hint book. You’ve gotta be at the end of your rope to do that. Now, maybe you last five minutes before going onto Google and getting the answer.0

My philosophy as a designer is if a player has to leave my game to enjoy it, then I’ve failed. But there’s no way to really avoid it. There’s no puzzle so easy that someone somewhere won’t get stuck on it. You can have a locked door and a glowing shining neon key right in the middle of the room and someone somewhere will miss it and get stuck!

Connors: In 2004, when we started Telltale, we had a vision that games should be released in smaller chunks over time. That would be a way to introduce more people to games. It was more consumable. You could finish it and digest it and move on to the next one. We honed our craft by looking at Mad Men and Game of Thrones. We’re bringing the elements that make a show great.

Schafer: Puzzles aren’t really needed anymore. They break the flow. For Brütal Legend, I thought about how to come up with puzzle design that makes confusion entertaining. It’s hard to get that through a focus group. We had these puzzles in Psychonauts and the first focus group said they didn’t know what to do with the paintings. They figured it out, but they didn’t know what to do at first. What’s the problem? We called that gameplay. But now it’s confusion.

“When I first started, I would’ve said story trumps everything.”

Adventure games are great at telling stories, but what are some challenges with that?

Connors: As a storytelling medium, we first looked at comics, but it wasn’t long before television was pushing episodic storytelling to a new level. The Sopranos was the first huge show that did it super well. Understanding their storytelling techniques and integrating those have helped us grow as a company.

For instance, you can’t really say when a story ends. The writers of The Sopranos closed a lot of threads, but not them all. They would build a character and the character brought their story with them. You’re able to create it over time. That’s the nature of the beast. You can’t tie everything up elegantly because when it shuts down in season five you can’t plan on having the next season.

Schafer: There’s a false tension put forth that gameplay and story are at odds. They don’t have to be in opposition. But, for the last ten years, you couldn’t talk about them. You couldn’t talk about story-based games. Even the components were off limits. But it seems like, the last few years, people started talking about Uncharted and Heavy Rain. That allowed us to talk with publishers. Some people have been permitted to make them. Heavy Rain was an allowance. Maybe the novelty is why people seem to be interested in something like that again.

Gilbert: When I first started, I would’ve said story trumps everything. But one complements the other. Sometimes, I’ll have a great idea for a scene, and I’m like, “this character jumps in and does this and it will be awesome,” but when I put it into the game, I realize it’s just one big non-interactive sequence. You have to actually be doing it. I have to think about what the player is doing. The interactive elements speak to me. I like to create something someone will explore.

INTERVIEW HAS BEEN CONDENSED AND EDITED