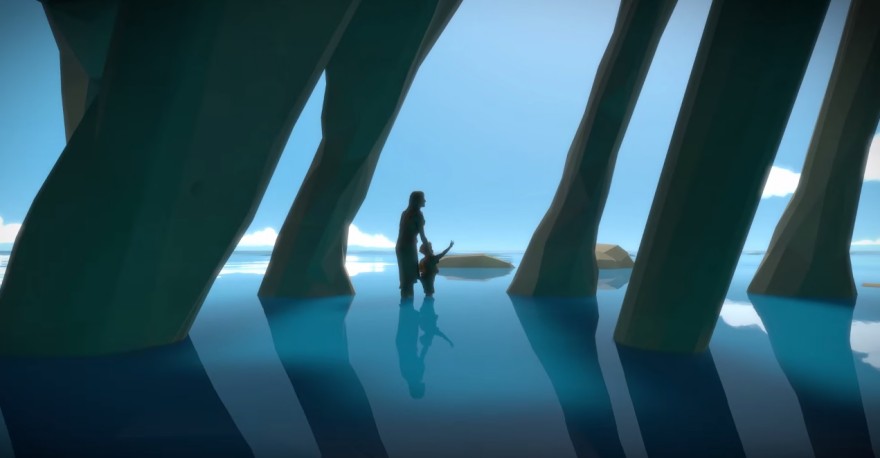 We have another four months to wait for it. We’ve already waited six years since Jonathan Blow announced it way back in August 2009. That was a year after Braid blew up and sent his name soaring. We’re halfway through the next decade now. What does he and his small team have awaiting us?

there’s much more to The Witness than solving puzzles

The new trailer shows only second-long glimpses at something larger than a puzzle game set on an apparently abandoned island. We know that, on these pastel lands, there are panels that need solving. They involve pushing bold white lines inside maze-like grids, some of them are self-contained, while others have effects on the surrounding environment. We’ve known this for a while. It’s not new.

But that frozen scene of a woman and a child reaching out towards a blue sky from a shadowy cave, that’s new. Getting on board a small wooden boat and navigating the coast with an interactive map, that’s new. Activating a machine to shoot a beam of pure light to the top of the island’s curiously mud-stroked mountain, that’s new.

Yes, there’s much more to The Witness than solving puzzles and manipulating parts of the island: its underground labyrinth, the towers built above the tree canopy, the bridges across open air. There are people to be found, or revealed, dotted around the island, their gestures captured as if cast in stone. There has to be more than puzzles. Or maybe it’s that the biggest puzzle is who built all these puzzles and why?

Blow has previously said that he expects “the average time of 100%ing the game to be over 70 hours.” That’s a long time. And there are hundreds of puzzles to solve. That’s all we really know. The rest is speculation. He’s done plenty of teasing, and it’s tantalizing that we don’t know what story is being told here, through these puzzles, through these lost people. But it’s also what has kept us hanging on for it to arrive for the past six years. In January we will finally get to work it all out.

The Witness is coming to PlayStation 4 and PC on January 26th 2016.