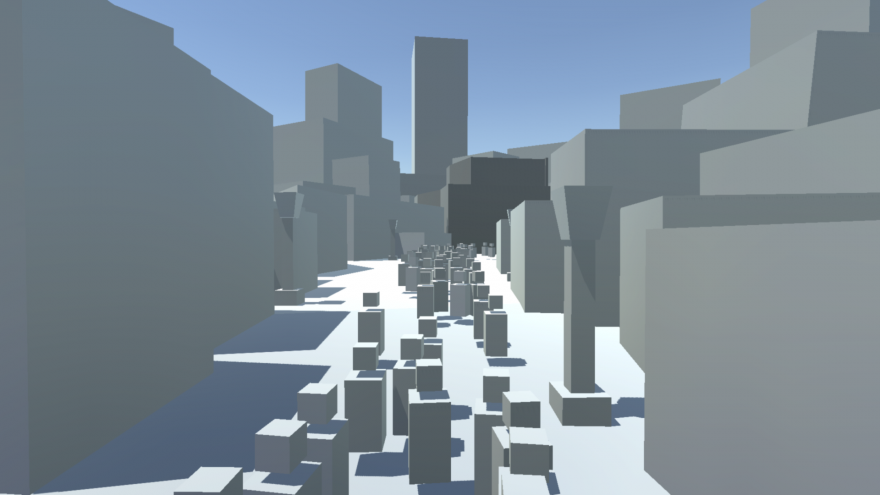 In “On Dérive,” the titular act is explained through text and your own movements through a virtual environment. To dérive (to drift), is to let yourself wander through the city with no prior aim or destination in mind; a spontaneous journey through the urban stage. The point of it is to demonstrate the specific design of a city, how its deliberate topography affects us subconsciously to guide us down certain paths, or as French writer and theorist Guy Debord puts it: “cities have psychogeographical contours, with constant currents, fixed points and vertexes that strongly discourage entry into or exit from certain zones.”

The On Dérive demo, created by David Cribb (aka Colestia), starts by quoting Debord and then throwing you into a boxy space in which you are constantly moving forward. You steer through a small portion of towers and alleys, enacting dérive without a choice, and eventually arrive at a red box stood lonesome in an open space. Then comes the revelation: Without realizing it, you took the path of least resistance, all due to the shape and angles of the architecture and the way it carves light. After another quotation, this time from philosopher Sadie Plant—which ends, “seek out reasons for movements other than those for which an environment was designed”—you return to the same space but this time have full control. You only move forward when you want to. The sense of urgency gone, you can properly explore, and in doing so will discover other channels you could have walked down. You resist the manufactured design of the city and, like the bubbling stream carving its own path away from the flow of the river, trickle into a maze of narrow passages that eventually lead to a green box. End.

Upon encountering Situationist ideas in Guy Debord’s 1967 book The Society of the Spectacle, David Cribb almost immediately thought of it in relation to contemporary game design. The similarity that most struck Cribb was in how both groups have enacted considerable study into how seemingly organic movement can be subtly controlled. “For the Situationists, the purpose of this analysis was uncovering (and undoing) the political structures behind the control,” says Cribb. “For game designers, the purpose was guiding the player towards important areas while maintaining an illusion of freedom of movement.”

actively work against the techniques employed by Valve

One game stood out in particular when picking apart these thoughts. Half-Life 2 (2004) and especially the clustered low-rises of its City 17 constantly come up as the masterwork in guiding players through an environment without shoving them around with waypoint markers, mini-maps, or camera-yanking cutscenes. This is something that game designer Matthew Gallant has written about in his article “Guiding The Player’s Eye,” in which he reveals how Valve subtly help players navigate Half-Life 2‘s environment through flocks of birds, ammo crates, and graffiti—”elements that fit seamlessly into the game world.”

This similarity became the starting point for a videogame project that would encourage players to actively work against the techniques employed by Valve and its many protégés. The invisible traces of a designer’s hand that guide people and players through urban spaces tossed out into the street to find a truer form of exploration. And this illusion would be broken down in a virtual metropolis called New Lethes.

New Lethes is the bigger project for which On Dérive serves as a type of demo. Both of these are first-person exploration games that view the city through elements of Situationist theory. But whereas On Dérive can be considered the lesson, New Lethes is the essay you sit in order to pass the subject. It takes place in the fictional city of its namesake, the most notable feature of which is the large pathway running through its middle, a busy canal of commuters constantly walking through. This large and obvious path has many small offshoots on either side of it but no one wanders them. You should know where this is going.

But to fully understand what New Lethes is getting at you first need to know a little about Situationist thought. The guy quoted at the top of this article, Debord, is one of the movement’s most important members. Branching off from Marxist theories, Debord wrote about how the city is an environment built to keep order and control, especially over the proletariat. This was part of Debord’s larger argument that capitalist society had bred a form of social alienation among people in which they are treated as passive objects; told what to do, what to desire, ever-consuming products that they didn’t need. To get out of this boring rut of existence, Debord and the Situationists suggested and acted out détournement (“rerouting” or “hijacking”). Whereas capitalism employed “recuperation” to channel social revolution and working class resistance back into into its own power structure—punk rock clothes being sold in boutiques, for example—the Situationists aimed to reinvent the everyday to jolt people out of their routines. Strikes and vandalism in public spaces, sabotaging the images of capitalism, all of this was incited by Situationist thought, going on to inform the May 1968 uprisings in France.

wander the path of most resistance.

The architecture of the city was targeted by the Situationists as a prevalent means by which capitalism held a grip over people. As On Dérive demonstrated, it can be used to steer us physically through spaces, acting as a singular mass of singular thought—all of us easy to control and manipulate in service of the elite. This is what you see when New Lethes opens up, all those people walking the same path, dull and grey. In order to turn “the whole of life into an exciting game” the Situationists worked against what dérive exposed, and so must you in New Lethes, with a view to aimlessly wander the tiny labyrinth of city streets that no one else does. You must deliberately work against designs supposedly greater than you. You must dare to get lost.

It’s in this exploration that you discover the truth of this city. In mimicry of John Carpenter’s They Live (1989), there are a pair of glasses you can find that reveal words such as “BOREDOM” and “TIRED” spread across the city in huge font, invisible to anyone but the glasses-wearer. This is only one of the significant events to be found within the urban sprawl of New Lethes and probably the most unoriginal one. As day passes to night, you will see riots break out in the streets, and later there will be subterranean surprises providing you wander the path of most resistance. Eventually, you will work your way to some other space separate of the city where you can move like a ghost through enormous skyscrapers that assert a terrifying authority at you—they scream at you without mouths. When you have performed this act of ultimate defiance against the controlling architecture of real and virtual spaces (daring to fall into the void behind them), you will discover that, at last, you have beaten the system.

You can purchase New Lethes on itch.io. The On Dérive is demo is free to download on the same page.