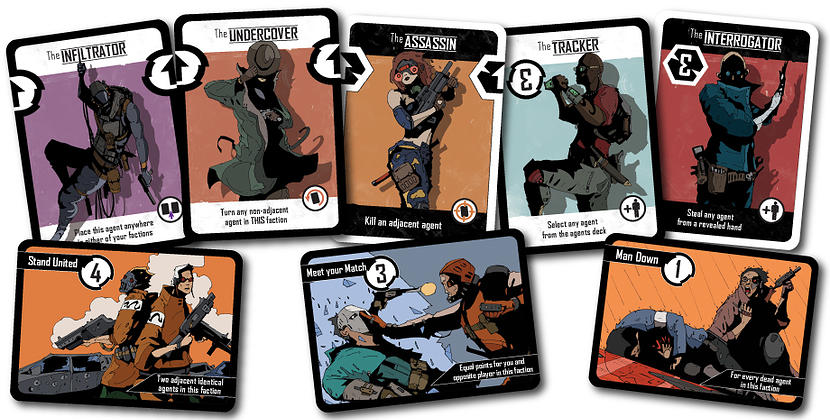 Of the many types of competitive gamers, it can be most frustrating to be pitted against the player who cannot give ground. They take their sweet goddamn time to plot out every potential move, sussing out the pros/cons. This is, of course, a good strategy. But a full five minutes of watching someone think can really drain the fun from a game. This is partly why I’m so terrible at chess; not having memorized gambits and patterns and strategies, my game is cripplingly short-sighted as I only play maybe one move ahead at most, unable (or unwilling) to anticipate my opponent’s ideas.

The Agents, a recently Kickstarted card game by Saar Shai with fantastic Hellboy-meets-Aeon Flux illustrations by Danny Morison, is not the game for a player who cannot bear to suffer a wound. It is aptly billed as a “double-edged” card game, as every card played potentially benefits both players affected. For the most part, throughout The Agents, there is no perfect move that doesn’t, in some way, help your opponent.

Certain players will be driven nearly mad by this, but I found it liberating. It’s laid out so plainly early on that there is no advantage earned without a very real, immediate cost; I just adjusted my point of view accordingly. Depending on your opponents (the game is for 2-5 players, optional rules notwithstanding), a playthrough of The Agents can be both fast-paced or paralyzingly slow. This isn’t the fault of the game; it’s the fault of your opponent and how tortured he or she is by the game.

This knowledge is at the heart of the game’s metaphor. The titular agents are freelancers, cut loose from an organization that was dissolved, and now it is up to the players to balance their commands and potential benefits for themselves. The object of the game is to collect 40 Intelligence Points, which are also the currency spent to acquire more agents, and importantly, missions.

While the players set up factions against each other, the agents in each faction offer either specific commands or the potential to rake in IPs. When you play an agent, you make the choice between using that card’s command and giving your opponent potential IPs, or vice versa. There are also Mission cards, which complicate matters by compounding the number of IPs that are awarded at the end of a turn but setting up a whole host of stipulations that need to be met.

Some people can’t handle this give and take. It takes them longer to accept that a step back will always happen and that you just have to plan on taking two forward in return. Of course, that isn’t always the case, and you can have a rich mission giving you sweet rewards until the other player turns your key agent against you—though that may potentially benefit you in the end, as well. Triple-cross!

Rather than a battle, The Agents is more like a dance, with players swinging around each other hoping to pick up IPs on the way. As the cards define the moves, a lot of the outlying rules are malleable, and the website even offers a host of alternate rules. The game lays out a solid bedrock that is fun on its own, but it’s also easy to build upon and create custom games with old foes to keep the espionage fresh, like a new song to do an old dance to.

And while I don’t believe in bad players as long as fun is had, hopefully you’re playing someone who is more comfortable getting loose rather than running down each possible step with lifetimes in between. On the other hand: the victory is a little bit sweeter when your opponent, despite near-hours of contemplation, grants you the possibility of a tide-turning move.