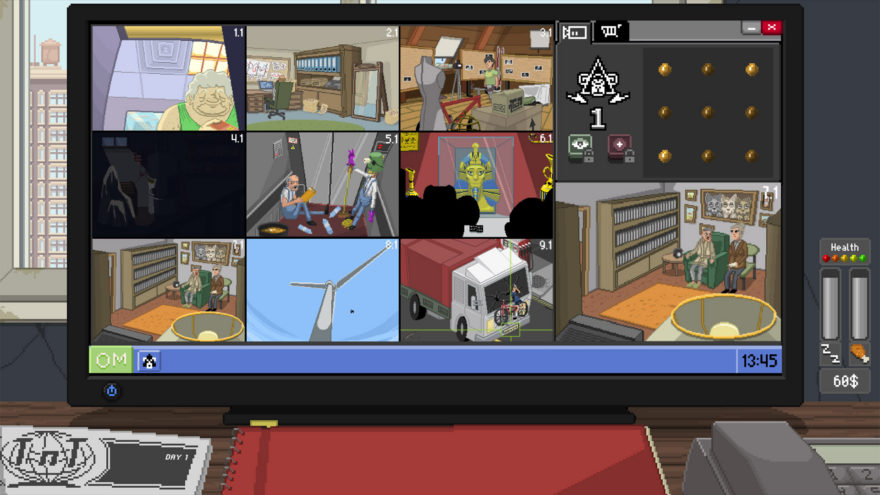 It’s no surprise that videogames are increasingly interested in matters of surveillance. After all, these days we can all feel like distant observers of each other’s lives, peeking in from the fringes provided by social media. There’s plenty of fiction from the 20th century that predicted our current circumstance: Nineteen Eighty-Four (1949), Brazil (1985), A Scanner Darkly (1977), and so on. Perhaps the only surprise is how willingly we submit our personal lives to the machines that are made to watch us.

Last year, videogames got serious on the subject, with harrowing thrillers like Replica, Orwell, Inside, and Watch_Dogs 2, which all took our monitored realities and stamped them with the word “DYSTOPIA” in wet red ink. But isn’t it all a little too obvious and somber? It’s not like these works of fiction across any medium (that includes you, Mr. Robot) is casting our lives in a light we’ve never seen before. We know we’re being observed and a lot of us don’t care. As that is the case, how can these narratives be the portents they seem to want to be?

All I’m saying is that, hey, perhaps we could do with laughing at our shackled existence every now and then. Yeah? That’s why I’m interested in the upcoming “life-spotter simulator” titled Do Not Feed The Monkeys. It’s the next game by Fictiorama Studios, who has already participated in all the dystopian doom-and-gloom with its adventure game series Dead Synchronicity. But there’s only so many dark skies and burning metropolises you can take, I guess, which is why the Madrid-based team are making Do Not Feed The Monkeys now.

“One of the things we loved most when we came [up] with the idea of Do Not Feed The Monkeys was the chance it gives us to tell lots of different stories featuring lots of different genre: everyday stories, but also sci-fi, terror, comedy…,” said Luis Oliván, one of Fictiorama’s co-founders. Dead Synchronicity is thoroughly grim, dark, and deathly. But with Do Not Feed The Monkeys the team can leave that mindset and entertain a banquet of different tones, situations, even colors. It’s a palate cleanser.

It’s the format of Do Not Feed The Monkeys that lets it function as a kind of refreshment. It works by having you sit down in front of a monitor that shows you different camera feeds from around a city. This instantly gives Fictiorama a chance to go wild, offering a range of different subjects to monitor from your cozy spot, each feed a small story that can swing towards any genre they fancy. Taking a look at the screenshots that are currently available, you can see a horse-headed robbery going wrong, a janitor going crazy as he’s stuck in an elevator, and a cyclist who’s crashed into the front of a garbage truck.

With a healthy mix of dark humor and acid humor (jokes with ridiculous and abnormal thinking, such as might come from someone on acid), the team decided that only a vivid pixel-art style would match the chaotic nature of the game. “Besides, we also felt like working on a more comic art style, after working on the dark, geometric, expressionist style [of] Dead Synchronicity,” said Oliván. It’s also important to make sure that Do Not Feed The Monkeys is amusing enough just to look at without even interacting with it—the comic style visuals help to achieve that.

The reason that is wrapped up in the game’s title. The story goes that you join “The Primate Observation Club,” which gives you access to all of these camera feeds, but the caveat is that you do not get involved in the lives of the people you watch. You’re supposed to observe the monkeys (aka people) without interfering. But, as with the game Please, Don’t Touch Anything, the idea is for you to eventually give in to temptation. How you might get involved is to use the information you acquire through your observation to comb through social networking profiles, emails, and online documents. You can tamper with these things and doing so can affect the fate of your subjects.

But there’s a little more to the game than that. Other than getting caught for your interference, the other risk you run while playing Do Not Feed The Monkeys is negating your own well being. You have to decide to spend your money on buying more “cages” (aka camera feeds) or paying rent. You have to make sure you go to sleep so you don’t collapse from exhaustion, but what might you miss while snoozing? Monitoring your own health becomes a more important part of the game as you rack up the hours sat idle at the computer.

Fictiorama are focusing on getting the PC version of Do Not Feed The Monkeys finished and hope to get it out in 2017. They’re open to other platforms but can’t say anything about that yet.

You can find out more about Do Not Feed The Monkeys on its website.