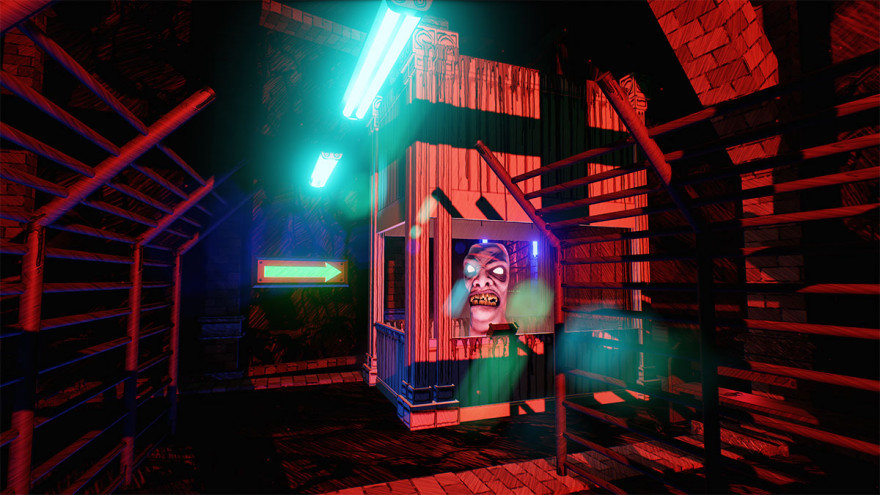 Without the screeching whines and tremorous cello jolts of jump scares, everything is laid bare. All of Albino Lullaby’s Grandchildren—fat little fingers with glowering eyes sans pupils or corneas—come out of hiding from far away, oozing slime and coasting in your direction. Like so many of horror’s monsters, they’re inevitable. You easily outrun them, but they’ll chase you forever, until you leave the area entirely. Run by one, sure. Groups of them? You’ll have to herd them like cattle. It does feel different, knowing you’re not between scares.

you caused the scares

At first, you play Albino Lullaby’s inaugural episode (the second due out early next year) like a first-person stealth game: You can run, crouch, and jump. The onscreen messages, written in a font resembling a child’s handwriting, encourage you to crouch by Grandchildren to avoid detection, and you’ll slowly make your way around, pushing the buttons you need to manipulate the nightmare architecture you’re trapped in. Nothing ever pops out at you, but you might be frightened by being discovered, as all the grandchildren nearby turn and begin oozing towards you. There’s a strength there, in that agency; you caused the scares. They didn’t just happen. It’s a nice trick, and will definitely get to you.

While the feeling is novel, you’ll realize how thin the ruse is after you’ve gotten past enemies or died a few times. A few minutes after that, the game realizes this as well. As bored as you might be of crouch-walking, the game then makes stealth an adorable ruse, a preamble to the frenzied herding you’ll have to do later on. No fear of something jumping out at you, remember? Keep running, keep pressing switches, and something kooky will eventually happen.

“Kooky” is a good word for Albino Lullaby. The game relishes in the “Ironic Nursery Rhyme” trope to a fault: the grandchildren utter phrases like “it doesn’t say ‘please and thank you!’” in the distorted and manic tones horror fans have gotten so used to; the childish fonts in the notes scattered around the game capitalize certain letters, hinting at less-than-fully-literate writers; and the Grandchildren behave like, well, children, submissive and loyal to Grandmother in that creepy horror movie way. Every chair, wall, and slab of wood looks colored in via crayon. It’s coherent and evocative look, but to what end? To more firmly correlate “crazy” and “scary” to raise a few goosebumps?

Albino Lullaby is certainly clever. It plays with scenery and expectations, literally moving parts of the house around in surprising ways. Torture devices and other scenic dioramas spring into shape out of nowhere as the spaces you’re in reconfigure themselves to suit narrative pacing. It’s all nice to look at, and certainly reminiscent of some aspects of David Lynch films, which Ape Law is going for here—they describe the game as a “surreal psychological nightmare.” The unsettling feelings are right at home then.

“Kooky” is a good word for Albino Lullaby

But clever isn’t always enough. Playing Albino Lullaby, you’ll begin to feel like so many of the people you may have tried to convert into understanding the surrealist media the game so desperately wants to evoke; you’ll raise an eyebrow, and think “that’s it?” The themes and ideas similar tales communicate obliquely are missing, replaced by much more opaque prodding at significance. The rough edges, which often define fringe media, deviate towards annoying rather than engrossing; die and you’ll be greeted by the aforementioned writing: “tRy haRdeR thIS tIMe…”; at one point, the written objective is “I dUnno, WtF.” Thematically appropriate, but indicative of a lack of confidence to escape initial trappings, to go that one step further towards something meaningful.

Should the grandchildren catch you, a dark static begins filling the screen. If it fills entirely, you die. And that’s it. Start over. ““tRy haRdeR thIS tIMe…” That’s horror sans jump scares. You go through the motions again, bereft of motivation. A creeping start, a rush of adrenaline, and a slow death, followed by the empty implication that it’s worth continuing to bother.