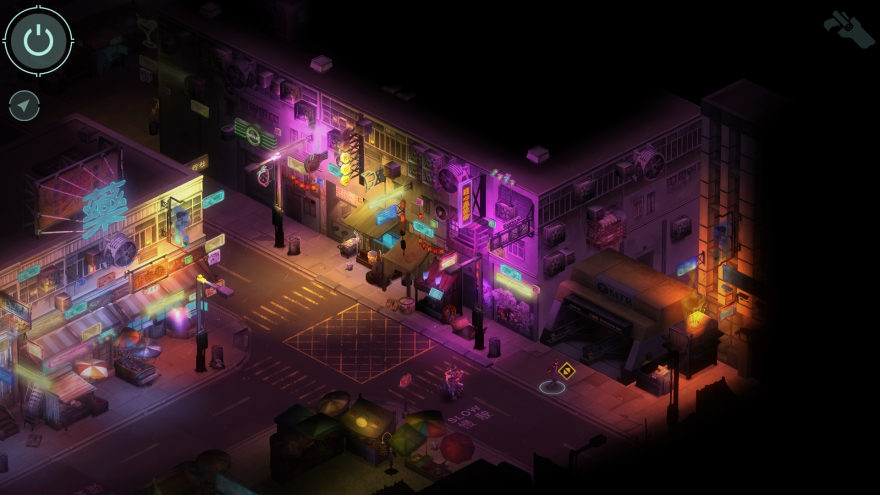 Asia is so often the dream of a cyberpunk future. Neon-soaked skyscraper canyons, and an abrasive mix of high and low tech, of the ultra-rich and the ultra-poor—these are the things that cyberpunk is made of.

But all too often, the essence of the place fades into a backdrop of the story at hand. Ridley Scott’s take on the Los Angeles of Blade Runner is a thinly veiled Hong Kong, but this serves as little more than visual shorthand for futuristic grittiness—at best, it’s an instant noodle signifier of mood in an otherwise more typical LA noir story.

This is true of many cyberpunk works that snatch a little Asia to add flair. In the 2000 videogame Deus Ex, a significant part of the middle third takes place in Hong Kong. Though the game reaches for the headier themes of cyberpunk, such as transhumanism and the atomization of identity, it fails to tap into the rich vein of this stuff that’s at your disposal when you decide to travel to Asia; instead, it focuses on the most obvious visual cues as little more than exotic window dressing.  Indeed, “Asian-ness” has become a trope of cyberpunk so deeply ingrained it borders on cliché. All of this stems from the genre’s coming of age in the 80s, when authors were writing against the backdrop of Japan’s rapid technological and economic boom, and artists were left gobsmacked by the majestic violence of 1988’s Akira. When William Gibson created Chiba-City in Neuromancer, he was putting down ley lines that continue to shape the genre to this day, but which have so far gone largely untapped.

Shadowrun Hong Kong changes that equation. Few western creators have embraced the Asian-ness of cyberpunk as surely and completely as this game does. The 2056 Hong Kong built here by Harebrained Schemes is not just a backdrop, but the beating heart of the game and a crystalline image of the dystopia at the heart of the genre.

As with most Shadowrun games, you role-play a neophyte sucked into shadowrunning heists and hacks for secretive Johnsons in a world of magic run by monolithic corporations that have co-opted the traditional role of the state. To do this, you are joined in an uneasy alliance with a smartly written band of quirky runners, from a young rat-shaman mainland immigrant to a dwarven Somali refugee turned master decker. But the city is the game’s true star.

The Hong Kong of the game has long since shed the defining problem of our real-life Hong Kong: its identity as both part of China, yet also separate from it. In real life, this has led to a crisis of governance as the Communist Party tries to exert control over its nominally “separate” territory, exemplified in last year’s “Umbrella Revolution,” which brought an entire generation of disaffected Hong Kong youth onto the street to shut down traffic for months on the city’s main thoroughfare.

In Shadowrun, this question was easily resolved—Hong Kong long ago left the collapsing China and declared independence. My, how refreshing it is to imagine the future of Hong Kong without the shackles of the Communist question! In fact, once you remove the identity politics, the true problem of real-life Hong Kong becomes clear: it’s a corporatist state run for profit, with the well-being of the populace merely an afterthought.

This issue gets to the root of what cyberpunk as a genre questions—a future where individuality is sublimated to greater corporate structures—which makes Hong Kong an ideal, if not the perfect, leaping-off point. “Cyberpunk” is already here today, in our real world, and the city of Hong Kong is its exemplar; and not just in the flash of its neon, but in its core governing philosophy.

For instance, Hong Kong IRL is led by a figure referred to as “The Chief Executive,” whose biggest daily challenge is juggling the interests of his mainland overlords with those of the elite tycoons who control the economy. At no juncture does the will of the people fit into the equation.

In Shadowrun Hong Kong, with the mainland overlords out of the picture, the city is now ruled by the Executive Council, which consists of reps from all the major corporations jockeying for market share. This shifting, shadowy cabal issues orders that alternately condemn you and redeem you. Though you are never quite sure who or what is pulling the strings, one thing is for sure—you are just a hopeless pawn in a bigger corporate game that you cannot understand.

not just in the flash of its neon, but in its core governing philosophy

This is not a far cry from the feeling of many of the young people who took to the streets of Hong Kong last year. They face a future as mortgage-slaves forced to toil for the same rapacious megacorporations that sold them their tiny concrete shoebox homes for an astronomical sum. We are, after all, talking about a city where to this day, the very poor are forced to live in actual fucking cages.

Nevertheless, this is a Shadowrun game. So that means that there are also elves, and orcs, and magic; and there are Johnsons who need runs; and you need money if you and your partners-in-crime are going to clear your names and go after the truth of why your father called you here before mysteriously vanishing.

The story begins strong, with an early twist that creates deep, personal stakes. You soon find yourself navigating a web of nested enclaves—from triad boss Kindly Cheng’s Heoi, to the singularity-chasing shopping mall state of Whampoa, and a newly rebuilt Kowloon Walled City, that quintessential extraterritorial hive of scum and villainy that in real life inspired many of the enclaved slums the genre is famous for.

Your missions draw from this rich setting, rather than being artificially imposed upon it. Whether you’re disrupting the feng shui of a rival corporation (which, in the magic-laden SR universe takes on dangerous significance); blackmailing a producer who keeps his starlets on slave contracts; or infiltrating a megacorp to retrieve stolen trade secrets; the missions don’t just forward the game, but also immerse you into the dystopic city.

Hong Kong is alive and authentic in the gorgeous artwork: the curvilinear architecture of Kowloon tenement buildings, the gritty back alleys full of rats and beggars; the street markings and subway signage done with precision. Each outdoor environment is a desktop-worthy background for Hong Kong Heads (embedded with sly nods that only long-term residents would get—The Wishing Tree!). The vivid writing also brings the senses of the city into focus: the place is full of harbor stink, rubbery fishballs, aimless swirls of police lights in dark alleys, and plenty of salty macaroni and spam soup.

The actual shadowrunning is no great evolution on the tried-and-true formula of the past two Shadowrun games (though it has improved its hacking minigame with a system swiped from the ‘80s pass-it-along-game Simon). This is a shame when it comes to creakier systems in dire need of updating, such as the counterintuitive inventory management, and the lack of briefing menus when you take on a mission. The turn-based combat remains deliberative and solid, despite wonky stabs at systems the engine is simply not built for, such as stealth. And for all its smart writing, the pacing becomes dull after the first act, when you are basically forced to wait for someone else to deliver the climax to you on a plate.

These are quibbles. Shadowrun Hong Kong’s success boils down to a smart early decision to stay true to Hong Kong, and exaggerate the flaws of the city’s bizarre governing philosophy to find a new, urgent relevance in the cyberpunk genre. As a long-term resident of the city myself, I found that as the central mystery started to resolve into a corrupt state-sanctioned housing scam that enriched a family-run business at the expense of the ultra-poor, I started to cringe; it was too close to the bone. Setting aside the orcs, elves, and Chinese demons, Shadowrun Hong Kong taps directly into one of Asia’s driving economies to deliver a startlingly clear vision of our cyberpunk future: one where we are all merely economic units on a corporate spreadsheet—to be compounded or deleted at the whims of an anonymous board of directors.