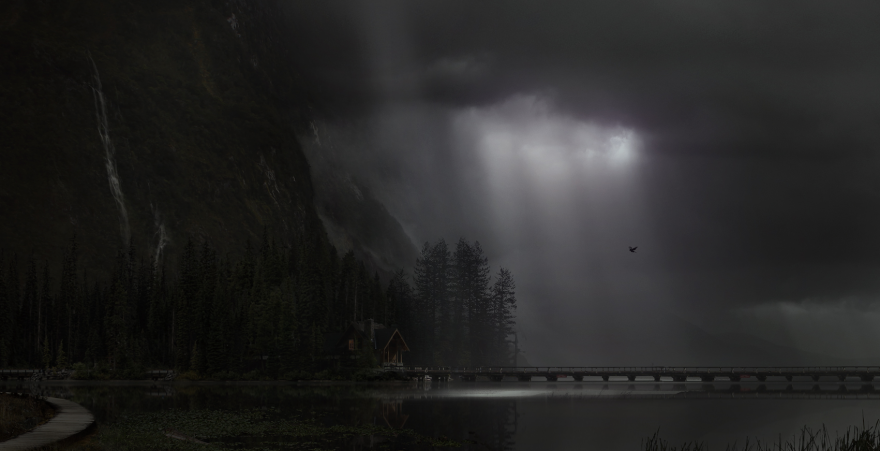 The world outside Allison Road’s iconic house setting is even stranger and more dangerous than what’s previously been revealed.

New concept art for the upcoming horror game shows off an eerie forest setting, a moss-covered wood in the shadow of a looming mountain and overlooking a grey lake. In one image, an old dock juts out over a bottomless void. A figure kneels on the dock near a small rowboat, which hovers above the empty lake as if all is still well.

Both the dock and the lake do look normal in the image before it, which makes me wonder if Allison Road is set across alternate dimensions, similar to Silent Hill’s iconic “otherworld.”

Allison Road’s project lead, Chris Kesler, provided a bit more insight about this new setting in an interview with IGN.

A girl in a bloody dress gazes up

“The exterior environments (for example the forest) actually have a very intricate connection to Allison Road‘s story that we think will be really fun to piece together,” Kesler explained. “The story just really lends itself to be told in contrasting settings and what better way to perceptually open up the quite confined space of the house, than to set it in a proper outdoor environment?

Only the inside of the house has been shown off in Allison Road videos so far, but the new concept art also hints at some of the horrors that might be found outside it. Take, for instance, this hellish interpretation of the Capitoline Wolf, carved from a rotted tree trunk and bearing a tangle of antlers on its snarling head. A girl in a bloody dress gazes up at it from the bottom of the stump. It’s unclear whether this is Lily, the game’s main ghost girl, or a new character entirely.

Speaking of new characters, the creators have also uploaded some high-def images of one named Hana. She’s an incredibly gruesome sight, tied up in an intricate rope harness and stained with blood. You’ll have to go to Allison Road’s Kickstarter page to see that one.