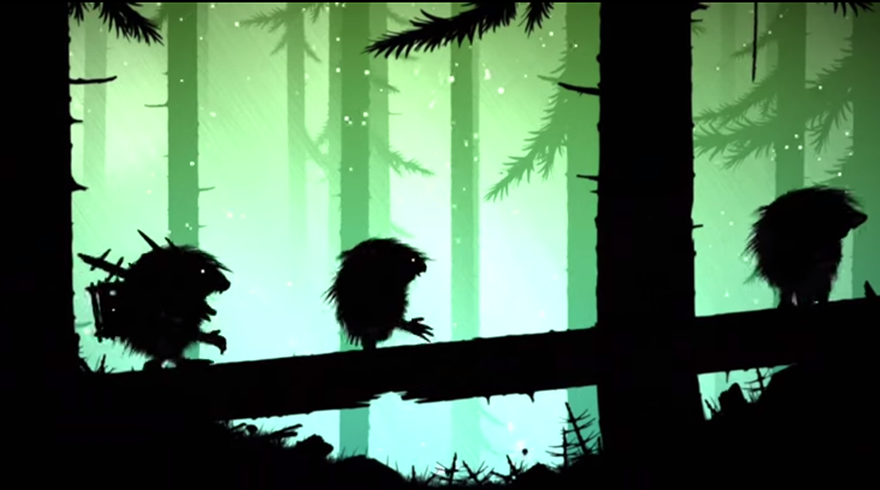 In Feist, you’re a little black fuzzball, with two widely spaced white eyes. You hop around with floaty jumps and make little grunting noises when you pick stuff up—mostly the stuff is bigger than you are, and you carry it on your head. You’re adorable, but Feist doesn’t care: you are small, you are squishy, and you’re going to die.

I remember back when Feist was in the running for an IGF award—“Excellence in Visual Arts”—in 2009. It seemed like the game disappeared for a while, making the rounds again in 2011 as if release was close at hand, and then updates stopped again until 2013, at which point, “encouraged by weekly emails asking for Feist’s release,” the two-man development team “set out to rebuild and reshape the prototype into a full game.” And now here it is, looking roughly the same, but finished. But its context is different, six years on. Back in 2009, its contemporaries And Yet it Moves and Blueberry Garden were still new; in 2010, Limbo came out, which reflected Feist’s black-heavy color scheme and unexpected spike pits.

You are small, you are squishy, and you’re going to die.

Like that game, Feist is full of obstacles that aren’t so much puzzles as they are death traps for the player to just barely slip her way out of. They’re based mostly on the game’s physics engine, which means a lot of swinging ropes and dropping rocks. The game creates a short arc for every obstacle: first you die (often several times), then you realize how to time the jump, or how to throw the pinecone just right, then you barely survive and sigh in relief.

There’s joy in this, but more than a little frustration, too. You might pass one obstacle, only to die on the next one and have to do both of them over again. The unscripted nature of the game’s mechanical interactions means that sometimes you might jump into the air, only to have two flying bugs and a ground worm shoot at you and land enough hits to kill you before you hit the ground. Death in Feist can be swift, unexpected, and inevitable.

Feist‘s physics aren’t the only thing that make it more difficult than it needs to be. The game’s insistence on minimalism gives it an elegance but, conversely, it also gets in the way. With no writing on the screen, and minimal indication of what hurts who, the game is sometimes so minimalist as to be obscure. Your fuzzball can survive maybe three good hits, and the game is scattered with flies that serve as health pick-ups, but you can’t tell what your health is at any given moment. Then, every few levels there’s a big rodent boss monster. They appear to shake off all the logs and sticks you can throw at them, so I tried escaping instead, but that proved impossible, too. Turns out you can kill them, but even though winning is possible, if you slip up, they can throw you across the screen into a pile of rocks.

You push on, when you do, because of the game’s rich world. The dark colors and imprecise shapes call to mind early animation work, especially the two dimensional stop-motion films of Yuriiy Norshteyn, like Hedgehog in the Fog, or Tale of Tales. All the dropping and swinging through this environment adds a sense of tactility that these early, hand-made animations also boasted. The environment Bits and Beasts have created feels dark and slimy, dank and frightening—a nice place to visit, but perhaps a touch too convincing in its dangers.