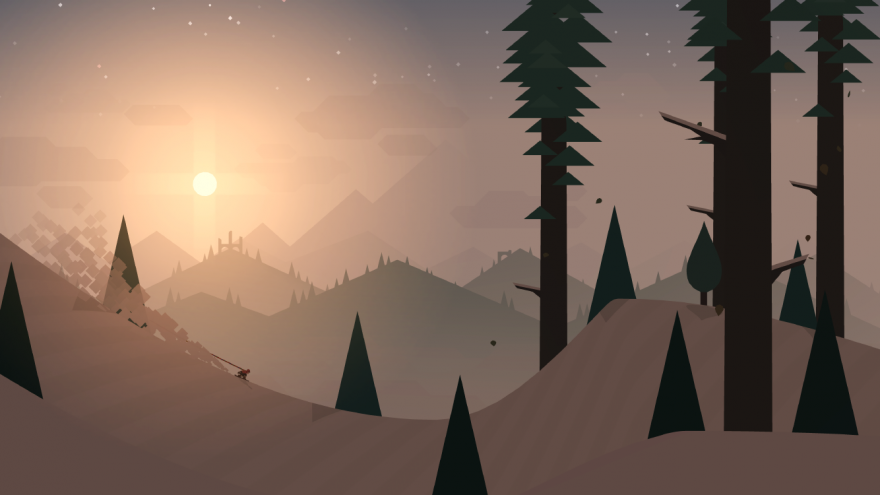 Snow is slumped in a delicate curve against a lumbering mountain. The unseen people of a small village set into the same hulking landmark hang colorful flags between tall poles. Chasms appear out of nowhere, pushing the edges of the rocky ground to peaks; ramps on either side that lift and receive. It’s these seamless 2D terrains that you flip and grind a snowboard across in Alto’s Adventure, all while purple night skies tumble into golden dawns, and llamas flee from the mountain top and your pursuing grasp.

“you against the mountain, alone in nature”

Snowman, a small Canadian studio, wasn’t satisfied with the range of snowboarding games on the App Store. In the past, they’ve drifted across Ontario’s snowy sierras, even headed out west to the Rocky Mountains to slide along its slopes. They knew how snowboarding against stunning landscapes felt, but none of these throwaway mobile games represented it, or even tried to.

“We wanted to capture the essence of snowboarding. That feeling of a great flow. Something fluid, fun, and natural feeling. That feeling you get when it’s just you against the mountain, alone in nature,” says studio founder Ryan Cash.

Alto’s Adventure is Snowman’s effort to fill that absence. It’s doing this by paying a lot of attention to the art of implication. As such, the scenery is “of a Peruvian flavor” but not belonging to anywhere in particular. There are thick forests of large trees, lonely windmills, and snow-capped towns to pass by. Dangling soft beams of light over it all is the sun or the moon in the backdrop, hovering above distant misty peaks that soar and recline, matching your own diagonal movements over the varying inclines. The visuals are harmonious in their beauty.

Likewise, the story isn’t told; you piece it together from small wordless events that occur as you travel down its endless mountain. At one point, an elder sleeping by a campfire disturbed by your sport, rushes up to a nearby llama’s back to give chase with a stick. Given that you’re attempting to recapture escaped llamas, could this elder’s immediate disapproval of your presence indicate that you accidentally let them out? Possibly.

But you’re not out just to mend an implied wrong. You’re also there to catch big air so you can backflip before landing squarely back on the frozen snow. You can collect points by performing tricks, catching up to llamas, and collecting gold trinkets that form trails and shapes in the sky. But it’s not necessary to adhere to the high score game to progress. That, instead, is found in beating challenges, and there are 180 of them to conquer.

That number may seem quite big, perhaps an effort to get more out of the repeat-heavy formula of endless arcade games. Either way, this is an element inherent to the genre that Snowman has addressed while keeping within its aims. To keep the world feeling natural as you recycle playthroughs, the day/night cycle carries over from one attempt to the next—so, if the sun was going down when you bailed, when you retry it will still be moving towards dusk. It may seem like a small detail but it acts like a glue holding the experience together.

Adding to this, the environments cycle randomly and offer enough variation that it really feels like you’re going down different parts of an enormous mountain. This helps to keep you curious, chasing those nibbles of story, or getting closer to unlocking another playable character. It seems to be a successful blend of arcade-style trick runs, and a world that feels whole, natural, and that invites you to seek its secrets.

Alto’s Adventure will be out for iOS on February 19th. Check out its website for more details.