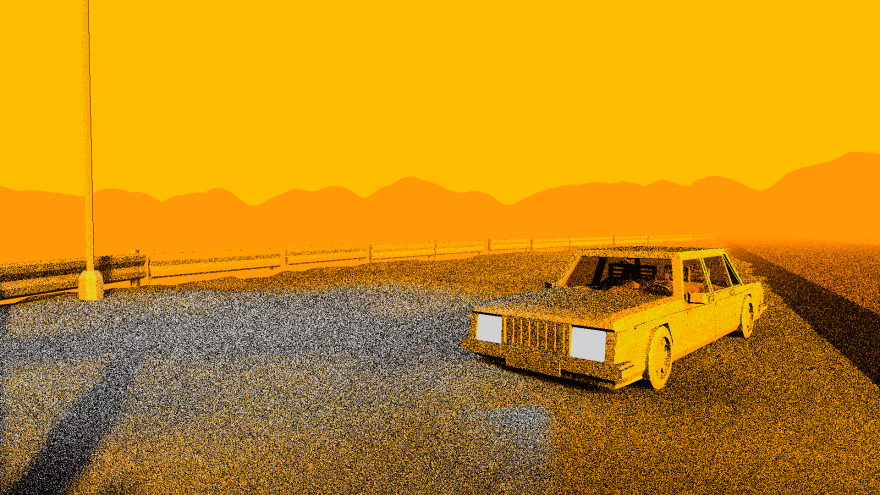 Ah, it’s so good when this happens. What am I on about? Oh, you know, nine independent game makers decided to get together and make a game each, then package them all under the title Ambient Mixtape 16.

The idea was for all of them to use the same tools and format—a First Person Camera controller made by Alex Harvey for Unity3D—and to see how their individual styles interpreted the theme “After Hours.” For the most part these are mood pieces, focusing on broadcasting a sense of unease, often using a choppy or distorted visual effect with killer sound effects and eerie music.

All of the games are available to download for free, with the option to donate money to any of them if you wish, so it’s best if you explore them by yourself. But I can’t help but offer some of my own impressions of them if you wanna carry on reading. Oh, and I’ll say now, I couldn’t get Lycaon’s game THE HOUSE THAT DRIPPED BLOOD to work on my machine, so unfortunately I don’t know how that one is (I also couldn’t get Lycaon’s “haunted town generator” Silent Crossing to work for me the other day, which makes me very sad).

The game that stood out the most to me was Pol Clarissou’s t- e ni hтm-are of·`a c ty (the nightmare of a city). It actually plays with a nightmare-like logic: the slightest movement sends your vision into disarray, so that you can only see clearly when standing still. That means if you get spooked in its endless, dark cityscape then you only make things worse by trying to run away. You should definitely try standing in front of a car, too—they zoom at you then pass through, beeping, as your view swerves violently. I’d go so far as to say it’s a masterpiece of urban terror.

a masterpiece of urban terror

Exit 19 by Jack Squires is also a highlight. It’s a horror story that takes place on a highway at dusk. Beyond the obvious uneasiness of its static visuals, it’s particularly effective at evoking vulnerability by positioning you as a lone figure in a vast desert, where you follow a breadcrumb trail towards something sinister. At each stop, you get creepy text that draws up a sense of inevitability, as if you can’t avoid your terrible fate. It’s a slow, menacing game that makes great use of its transition into the night.

René Rother wins the best title award of this collection of games with Rotting Crescendo. It’s a confident micro-game for the most part, too. It takes place on a boat in the middle of a stormy ocean. I love that when you go outside the character raises a hand to shield their face. The puzzle you have to solve isn’t as tight as the rest of the game but it’s far from a tragedy (although, the ending it leads to is certainly tragic, in a good way).

Animal Phase’s touch me2 seems to be the most open to interpretation out of all these games to me. It gives you this wonderful arm with a pointed finger that you shoot to interact with its theatrical world. You first use it thinking you’ll carefully pick up a small glass, but then the arm is fired at it, smashing it. It brings to mind the idea that controlling our interactions with people and the rest of the world can be difficult and damaging beyond our control.

The Migration has convinced me that Connor Sherlock is at his best when he makes things fall from the sky. Something of a veteran creator of the “walking simulator,” it’s his game TRIHAYWBFRFYH (in which something very large comes from the sky) that I still adore the most. In The Migration, he gives you the red sands of an alien planet to wander for as long as the music lasts—a very 1970s sci-fi, phaser blast type of song. There are monoliths and what could be the giant rib cages of ship wrecks long since decayed. Just make sure you look up every now and then.

Mr. Tedders and emptyfortress seem to have both gone for the same theme even if their games play very differently. Both of their games are concerned with the media and its poisoning effect on our modern population. Emptyfortress’s Panoptique doesn’t fuck around with making its point, having TV-headed men tell you that they watch you through consumer technology. While Mr. Tedders’s Media is dead, you are alive takes a little bit longer to get to its sermon, giving you obscure mazes and small puzzles to solve first.

Finally, there’s RoboCicero’s I Have Been There Twice, which seems to be intended as a fragmented, dreamlike trip through the mountain city of Jiufen, Taiwan. It starts off as a clustered urban space: houses bungled up as if a cluttered mosaic, alleys thinning into non-existence, moths buzzing around street lights. Then it leads you off into more spacious areas until the virtual space tapers off completely as you enter the ocean. What surprised me most, however, is the gloopy trail of liquid and diamonds that I left behind me with each step. Am I some kind of space slug?

You can find out more about Ambient Mixtape 16 on its website. All of the game are available to download at a pay-what-you-want price on itch.io.