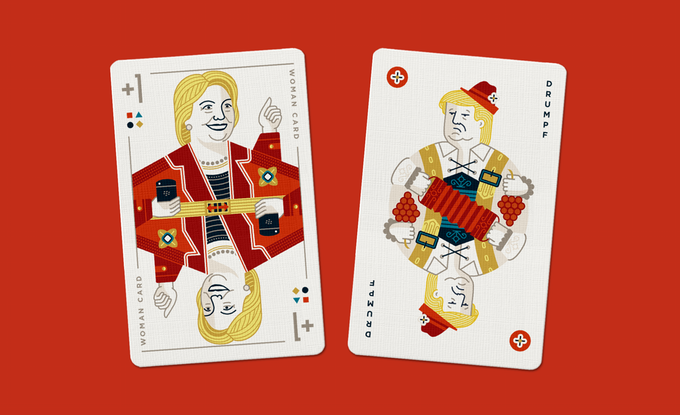 The Republican National Convention, in the midst of the chaos that has been this election, has officially nominated Donald Trump as their candidate for President of the United States of America. This isn’t a Simpsons joke, though it was, once. It’s the world we live in, somehow. While you contemplate that, biting your nails and staring across the room at the drawer you’re pretty sure your passport is in, consider this: there may still be a way to make this election fun and games.

Not the actual election, of course, because this election is a nightmare, we live in a nightmare universe, oh God, how did this happen—okay. A Kickstarter wants to make playing cards out of Donald Trump’s bizarre campaign for President, and you need to support them to justify this whole mess.

The State of Affairs:

Bernie Sanders. Jack. Twittering bird perched serenely on his outstretched hand, perhaps illustrating the size of his chance to win the presidency (1x1pixels.)

Ted Cruz. King. Except not after a couple nights ago. Now, more appropriately, a small pile of ash formed into the words “vote your conscience.”

Hillary Clinton. +1: the Woman Card. Keep in your wallet to destroy the deck as well as the patriarchy.

The Drumpf. Like Senator Cruz, soon to be set on fire.

These various people are illustrated by the duo behind Kings of India, and bring a measured elegance not found anywhere on cable news in the past six months. Their sacrifice is admirable: other characters will include Chris Christie, Megyn Kelly, Jeb Bush, and Donald Trump three times.

we live in a nightmare universe

To bring a bit of hope to the table, Trump Cards (aptly named) are going to include a betting version where the loser donates $10 to a charity of the winner’s choice. The ethical dilemma of making a very real threat to our nation into a card game is soothed somewhat: they’re well aware of which issues “Trump’s rise puts in jeopardy,” and hope to work with the ACLU, the Southern Poverty Law Center, and the International Rescue Committee. They’re doing their part to make something good out of something very, very bad.

We’re still in Hell, though. Just want to make that clear.

Back Trump Cards on Kickstarter before the world ends.