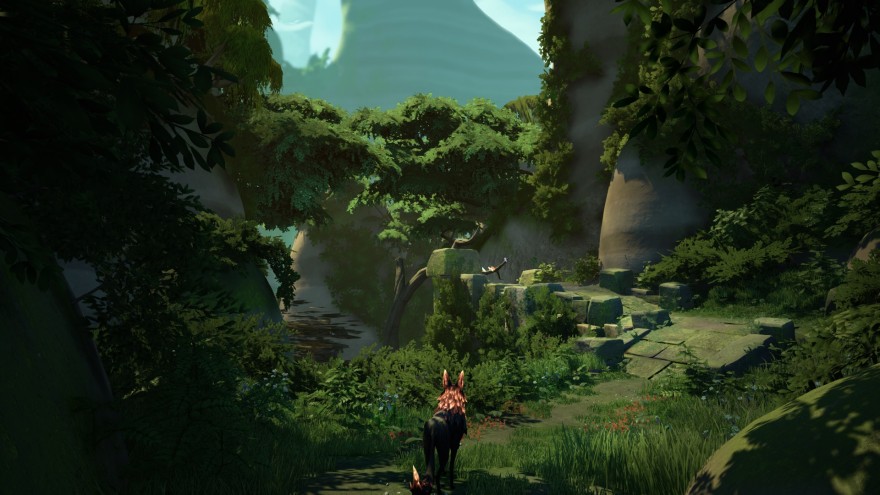 Mooneye Studios looked to narrative-heavy titles like Journey (2012) and The Legend of Zelda: Twilight Princess (2006) for its upcoming game Lost Ember. And like those titles, it began as a third-person exploration game with puzzle elements, but much of the development process has so far involved paring away its more traditional design concepts. “We felt that they [distracted] from what we are really trying to do,” says Mooneye’s CEO Tobias Graff. “We want to create an experience and trigger certain emotions, get the player to feel the story, and these mechanics always felt wrong for that. The main drive in Lost Ember comes from the story and the world itself.”

Players inhabit the role of a wolf with the power to command other forest animals, such as a parrot, for a limited time with the use of a magic bar. According to Graff, the single-player mode is all about the process of discovery. “The story is told through flashback sequences that take you back to a time where massive temples and huge cities demonstrated the power of the civilizations that lived in this world. Now, nature has claimed back what was taken from her, and there isn’t much left but overgrown ruins.”

The game’s world building is based largely on the history of the Inca and Maya civilizations, as well as other lost cultures throughout time. “Our narrative designer created a very detailed and complex history for all of these cultures,” Graff explains, “and the player will follow the path of one person who lived in this world and experienced the fall of the old empire through her eyes.” There will be flashback sequences that unveil the history this character has seen, triggered by the discovery of ruins and artifacts—the motivation for this character’s forward exploration. Graff hopes that players will be similarly motivated by this pursuit, and is banking on the different exploration possibilities that each animal character offers to encourage players to venture off the beaten path.

The studio’s next big challenge over the coming months will be securing funding, which it is hoped will be achieved through a crowdfunding campaign and a polished demo of the game’s first 30 minutes to show at this year’s Gamescom in August. Such additional funding would allow for time to finish the project, and—should certain stretch goals be reached—possibly reincorporate the co-op multiplayer mode from their earlier prototypes.

What should help establish prestige is the fact that Solid Audioworks—the audio team founded by Rockstar pioneers Craig Conner and Will Morton after two decades of working on the Grand Theft Auto series—is providing the game’s music and sound. And, most recently, at last month’s Gala of the German Computer Game Awards, the team behind Lost Ember was awarded the second prize for Best Junior Concept.

Presuming the crowdfunding goes well, Mooneye hopes to bring Lost Ember to PC, PlayStation 4, and Xbox One. VR is also being considered and a short VR demo was recently made that let people who attended the A MAZE. festival in Berlin to fly through the game’s world. “We’re not 100 percent sure [VR] will work, as Lost Ember is a third-person adventure and we might have to change a few things in how the camera works,” Graff said, “but it is really cool to just run through the woods or fly high above the ground in VR—so it’s definitely on our radar!”

You can find out more about Lost Ember on its website.