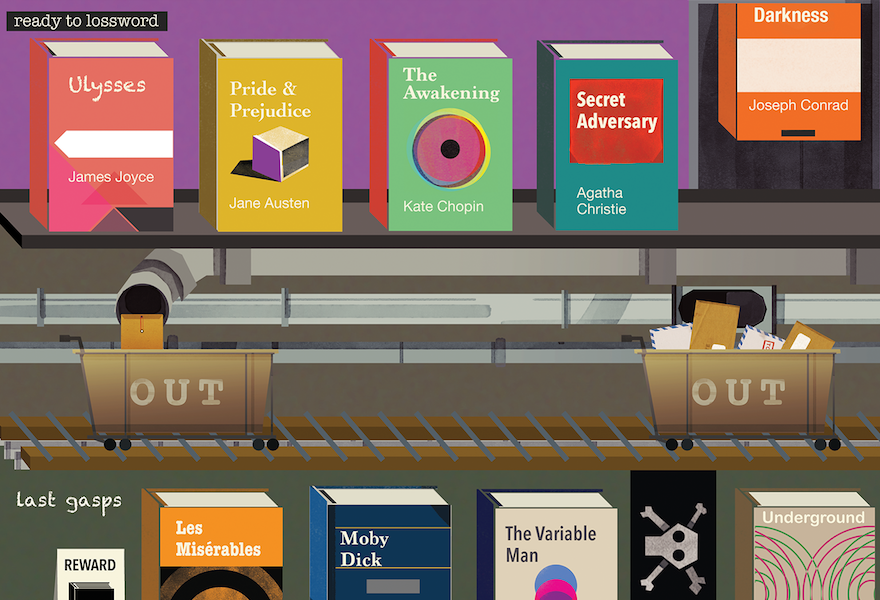 In the world of Ray Bradbury’s 1953 novel Fahrenheit 451, books have been outlawed and are burned en masse by the state, only kept in small collections by the occasional revolutionary. Instead of reading, the majority of people spend their free time in “entertainment parlors,” rooms lined with massive screens that constantly broadcast Dora the Explorer-style call-and-response programs meant to elicit the illusion of interactivity.

It’s a pointed premise, conceived during the early years of the television’s rise to prominence in the American household. It also reflects a constant theme in Bradbury’s work: that with advances in technology, culture tends to be forgotten. In Losswords, an upcoming puzzle game for iOS from The Metagame creators Local No. 12, it is the player’s duty to put that culture back together again.


Losswords has the player take on the role of a literary outlaw. They’re part of a subculture that scrambles and unscrambles books to keep them out of the hands of a government that has banned them in favor of a society where the only legal media is videogames. This is done through a series of puzzles in which the player reads through passages from actual classic books and tries to find smaller words within the passage’s existing words, similar to decoding a Boggle grid.

For instance, if the passage contains the word “unlimited,” the player can highlight “limit” to add to their score. Find every word-within-the-words hidden in the passage, and you get to add that book to your profile’s library, where you can read a description of it as well as a small excerpt. At the same time, you’ll be generating a puzzle for another player to solve, in which they’ll try to put the passage back together again by placing the words you found back within their original, larger words.

I got a chance to play a demo of the game during a meeting with the creators over the weekend, and even if my actual skill with it—or lack thereof—had me questioning my writing talent, I saw the appeal fairly quickly. As I was playing, I felt the same feeling I do when solving a crossword or trying to plan a move in Scrabble. “How did no one think of this before?” I wondered. As novel as the game is, it plays with the same confidence as a hundred-year-old classic.

“What if we made a game for librarians?”

“We like to invent new forms of play,” Eric Zimmerman, one of the game’s designers, told me. “And we like the idea of using culture as our playing field.” This trend can be seen across Local No. 12’s previous work, which includes Backchatter, a Twitter game in which players have to guess which words they think people will tweet most during an event, as well as the aforementioned The Metagame, a card game that encourages players to debate aspects of pop culture, history, art, and of course, fast food hamburgers. “We really want to think about games as a form of culture alongside film, music, theater, and literature,” explained Eric.

The hope is that Losswords will act as a vehicle for literary discovery, as each of the books used to create the game’s puzzles are in the public domain and currently available for free through the archival website Project Gutenberg. “What we hope is that we spark people’s curiosity about a particular book,” Zimmerman told me. “And they end up going out and reading it.”

Despite the game’s setting, which seems to poke fun at videogames, the development team is actually made up entirely of professors who specialize in teaching game design. “We’re not just designers, but also design educators,” Zimmerman told me. “We play lots of different videogames.” With Losswords, the creators not only hope to help people who enjoy videogames find more reading material, but also help introduce videogames to people who might not usually play them. “What if we made a game for people who really like books?” asked designer Colleen Macklin. “What if we made a game for librarians?”

Local No. 12 is currently holding a Kickstarter campaign to complete development of Losswords. They hope to release it some time next year.