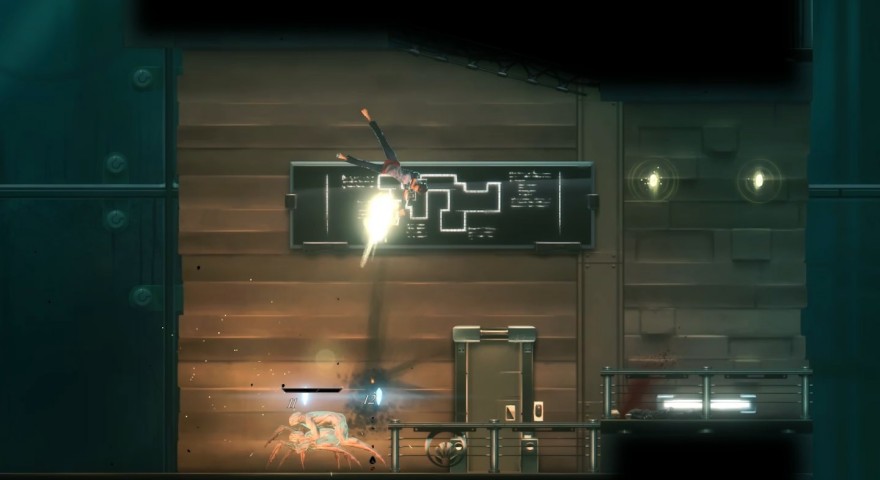 Seraph is a shooter in which you don’t aim. It’s set to hit Steam Early Access this month and PlayStation 4 at a later date. But if you don’t want to wait until then to find out how it works, here, it’s simple: it’s a 2D side­scrolling shooter that aims and fires your guns for you, leaving you to focus on skillfully dodging enemy attacks with increasingly flashy, acrobatic moves.

“The idea came from my love of the movies The Matrix (1999) and Equilibrium (2002). I wanted to deliver a gaming experience that truly delivered on how awesome these films looked and auto-aim seemed like a good way to achieve this.” Daniel Leaver, Seraph’s designer, told me.

Turns out that Seraph also doesn’t come short on the videogame influences either, with John Woo’s Stranglehold (2007), WET (2009), Max Payne (2001) and Devil May Cry (2001) all being cited by Leaver. He points out one major difference, though, and that is Seraph being played entirely in 2D. “This removes yet another barrier to a fun and accessible action game experience that 3D control schemes can often complicate,” he says.

Seraph also features a leveling system that ratchets up the difficulty as you play to ensure that you can jump right into the action, but will always be challenged by increasingly complex levels. Other RPG-borrowed elements typically found in modern action games such as a skill tree and upgrade system are also confirmed as features. They should help you tweak your character as you progress to better tailor them to your preferred approach to hostility: cartwheeling through crowds like a court jester or hanging back to make the most of your guns’ range. Levels are also procedurally generated ensuring you will have plenty of time to get your Quake (1996) sans mouse control fix.

On Seraph’s design mentality, Leaver said he was guided by the idea that it’s meant to be “as entertaining to watch as to play.” This manifests in the form of features built into the game specifically with Twitch streamers in mind. Viewers of Seraph streams will be able to vote on what level the streamer will play next as well as give them positive or negative bonuses leaving you to the mercy of the Twitch chat.

Seraph is coming to Steam Early Access later this month. You can find more info on its website.