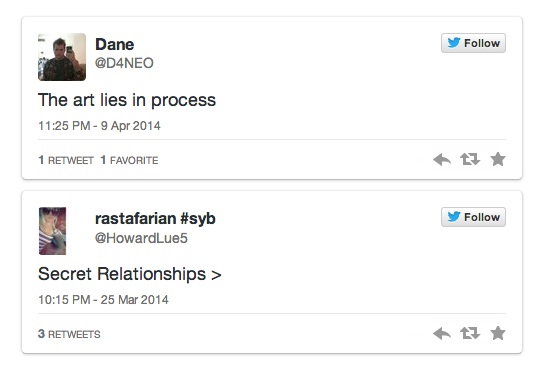 Anagrams tend to be the more abused form of word play. They often crop up in plot twists or conspiracy fan theories: back in the day, a mildly popular Harry Potter theory made a mountain out of a mole hill upon discovering that “Drooble’s Best Blowing Gum” (the phrase seen on a bubble gum wrap that Neville’s mother gave him at St. Mungo’s hospital) was an anagram for “gold bribe below St. Mungo’s.” Chaos ensued. Lost producers fueled an anagram craze among their fans by revealing that Ethan Rom (a member of the “Others”) formed the words “other man” when rearranged.

Luckily the twitter bot ANAGRAMATRON is giving anagrams some fresh context, outside of just pseudonyms and far fetched plot twists. The bot, created by Colin Rothfels, searches for two tweets that use the same letters to communicate entirely different sentiments. Rothfels says when he got the first prototype of the bot up and running, “the first anagram pair I found was ‘Aloha’ and ‘holla,’ which I thought was pretty great. Those were the first tweets on the bots account.

The pairings that follow range from being completely nonsensical to being actually kind of beautiful and poignant. Sometimes the contrast between the two tweets makes you realize just how arbitrary written language can be:

Yet others read more like estranged bits of conversation, with complete strangers thousands of miles apart finding themselves in dialogue.

Or, if not a dialogue, then something akin to popcorn poetry.

Twitter has already been used as a tool for poetry by micropoets, but the serendipity of these crowd-sourced verses have a magical quality to them. What are the chances? Rothfels says that while “anagrams are traditionally written by the language-puzzle set, I thought it would be interesting to try and find them ‘organically,’ and twitter provides an unimaginably big source of small pieces of English.” He’s seen around a hundred thousand twitter anagrams so far and explains that it’s become “a very ephemeral experience for me.”

You can find more of ANAGRAMATRON’s work on both tumblr and twitter.