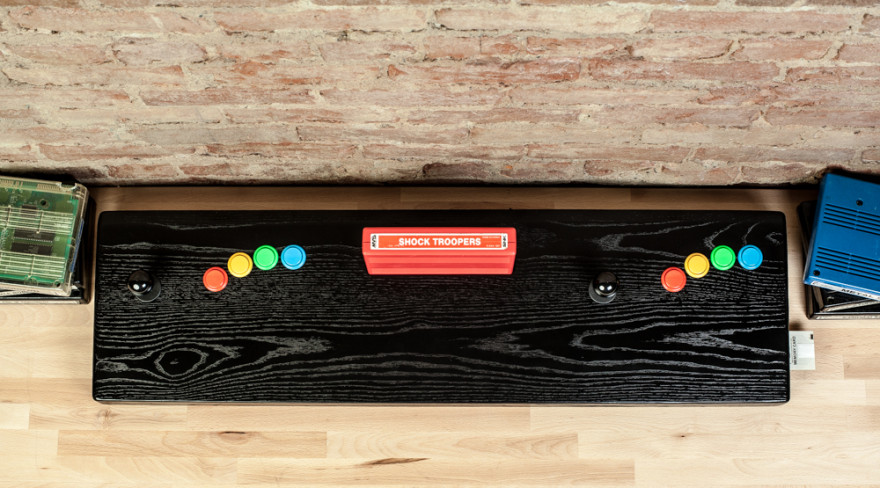 As a guitarist with an incurable lust for “tone,” I spend a lot of time reading about exotic woods, ebony fretboards, clean headroom, tube rectifiers, and Analog Warmth. That I blow it all on sub-Celtic Frost grunt-riffs is beside the point.

Videogames approach this fetishism in many ways: the quixotic quest for 1080/60 and its sister obsession, legacy consoles played on CRT TVs, are particularly visible right now. But there’s also the Byzantine codex of graphics options that await the intrepid PC player, .ini editing, and things called “G-sync” and 144hz, which I am utterly unable to explain to you right now because they are too future.

But our consoles rarely feel this considered. The PS4 perhaps edges out the Xbox One by being a slanted black box as opposed to a plain black box, but you’d have to reach back to the Gamecube for a console that seemed to embody something of its parent company, like a child with her mother’s eyes—the Cube looks like something you’d find in a Nintendo game. And maybe the Xbox One looks like something you’d find in an Xbox One game.

One thing they all have in common is their build quality, though: pretty crappy. It doesn’t have to be that way, though. Analogue Interactive founder Chris Taber is living proof.

In addition to Analogue’s sleek NES riff, the Nt, they’re putting out the new NEO in a limited run of 20. It’s a Neo Geo arcade machine, based off the SNK Big Red MVS (multi video system) cabinet. Analogue already makes a Neo Geo, though: the CMVS. But the CMVS comes a la carte, letting you buy the stick and the system separately. The NEO is all-in-one, more accurately emulating the arcade experience. And like all Analogue’s work, it is also drop-dead gorgeous.

That’s ebonized ash, man. Yes, these things are to OEM consoles what a ’54 Gibson Gold Top Les Paul is to an Epiphone LP Junior: a hundred thousand times sexier.

And more expensive, as you can probably imagine. The Analogue NEO will run you a cool $1,499. But before you balk at that price, which I totally get, give Taber a chance.

“I think people buy our products for different reasons,” he told me. “Some people may buy them as an art piece, but we certainly design and build them to be used and played.”

The NEO, he says, “started as a little hobby project. We designed and crafted it as a one-off for someone looking for a twinstick setup.” As for the limited run, “we literally cannot produce more than this in the current time frame. It’ll be about 8 weeks to build just these—we started in advance. Everything is entirely built and assembled by hand in the USA. No CNCs or anything. Our NEOGEO products are very special to us and that is the only way we will ever build them.”

This isn’t a console you pick up on Black Friday, in other words. It’s as much a design piece as it is an entry point into the Neo Geo’s action-heavy library. Sure, you could buy a Line 6, but don’t you really want a Twin Reverb: you know? You could put this thing in your living room, proudly reciting its bespoke bona fides to your dad when his eye is inexorably drawn to its distinctive coarse grain pattern. It exudes respect for the system, a devotion to the console that approaches the religious. I’ve seen crucifixes made with less craft than this Neo Geo.

“I want to make beautiful things. It’s the way I want to life my life,” Taber then repeated, like a mantra. So far I’d say he’s succeeding. And if his parting words to me are any indication—”In regards to other consoles, we have an incredible amount of other things in the works. Next year is going to be exciting!”—he’s only just getting started.