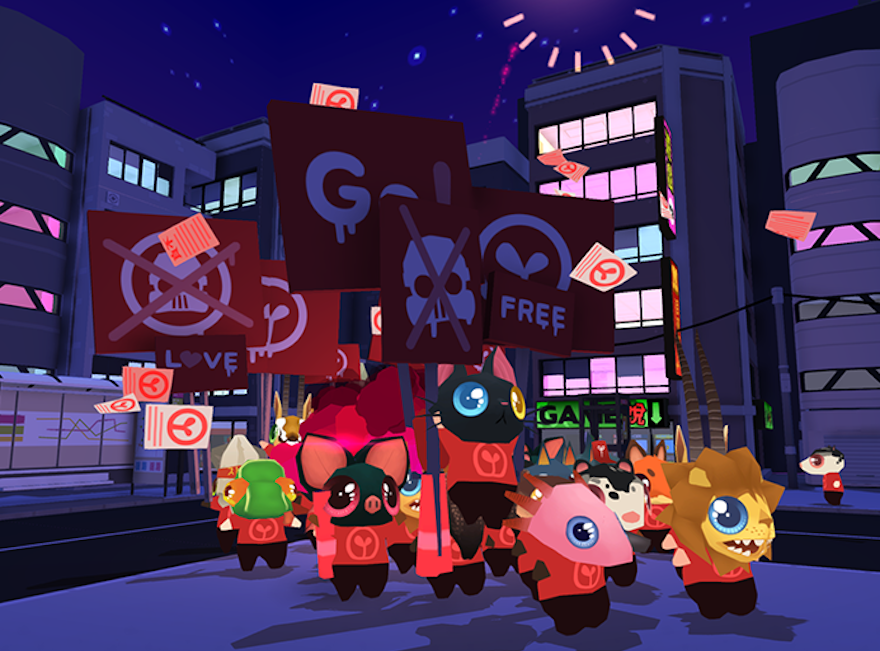 Punk music. Chains. Leather, drugs, mohawks, and spikes. The revolution, at least as far as it’s depicted in films like The Warriors (1979) and comics like The Dark Knight Returns, is often offputting and grotesque. These stereotypical trappings are hardly an accurate representation of real punk culture or political upheaval, of course—featuring teens tagging anarchy symbols on school playgrounds or mugging innocent strangers on their way home from work—but they do work well to create a sensationalized moral panic for a square-jawed Clint Eastwood type to come clean up.

Unfortunately, they also raise a question. If the revolution is supposed to be so fringe, then just where are these seemingly large gangs supposed to recruit new members once they’ve finished swinging by all the local leather bars?


Enter Anarcute, a revolution with a softer touch. Originally created as a school project by a group of five students from French videogame school supinfogame, the game focuses on a group of rioters fighting against the “very very mean” Brainwash Patrol. Like a more earnest Hotline Miami (2012), the game’s rioters recognize each other by wearing “cute-Kawaii” animal heads, meaning players control whole groups of bunnies, kitties, and frogs as they march through levels and increase their numbers.

a revolution with a softer touch

It’s also got a bit of a collectible element to it, with the website promising more than 70 different animals to recruit, including oddballs like horned beetles and snails. As players snag more rioters, they’ll fight back by tossing cars and other debris at the Brainwash patrol, even going so far as to take whole buildings down if need be. “Our rioters are ready to do anything,” write the game’s creators. “Even if it means destroying whole cities to rebuild later.” While the team recognizes that this “could be a rather sad and dark game” if seen in a different light, they insist that the game is meant as more of a comedy, and that we are in good hands. “Who better than a bunch of French people can make a game about riots?”

It’s a more widely appealing take on revolution than we’ve seen in other riot stories, offering a friendly entry point for people who might prefer Pokémon-style critters to the rough-edged counterculture of Akira (1982), or even the free-love antics of Burning Man. Inclusive and sharable, it reflects a time when revolution sprouts up in hashtags as often as it does in boarded-up back alleys.

Anarcute will be coming to PC and Xbox One this summer. To learn more, visit its website.