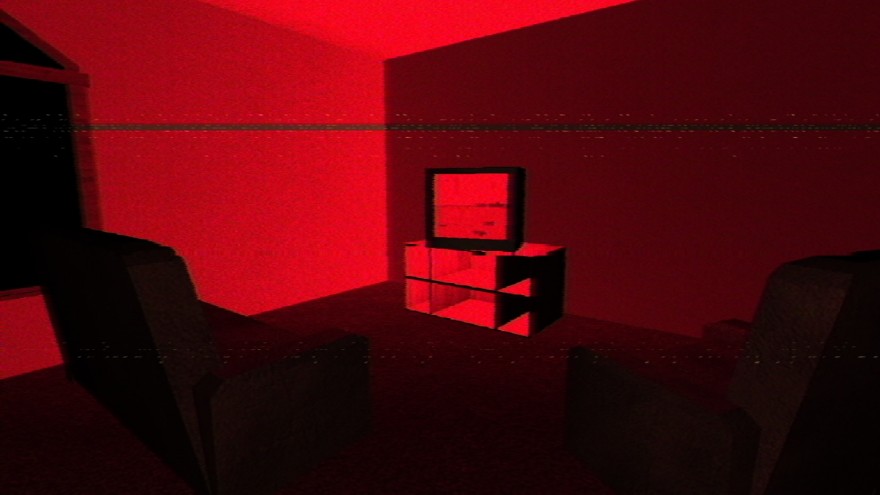 The scariest part of The Exorcist (1973) for me wasn’t all the bedroom acrobatics and green puke, it was a much subtler scene. In it, Father Karras sits before large spinning reels as they playback the recorded voice of possessed 12-year-old Reagan MacNeil, all of it incomprehensible gurgled groans and anguished, hoarse throatiness. Karras wants to know what language it is and the guy who’s assisting him has the answer: “It’s a language alright.” He pauses. “It’s English.” Turns out Reagan was speaking English in reverse. It then cuts to Karras later that night, lit by the low light of a desktop lamp, a palm pressed against his head, the other hand clinging to a cup of something hot as he listens, stressed, to the voice of a demon barking at him. He’s caught up in the terror of it all until the telephone in the room suddenly rings, snapping him out of that looping hellhole.

That scene stuck with me due to the media within which the demon penetrates our reality—the cassette tape. When the devil is inside a young girl it can be conceptually terrifying, sure, but the physical performance carries the distance of drama with it. We know that this is all make-believe and that we’re watching an actress. The more plausible horror, at least for me, is in the idea of something terrible existing inside an everyday object, one that I have to hand, and especially one that so easily lends itself to being rewritten—a constant mundane horror of the ’90s was accidentally recording over the treasured contents of a VHS tape.

the terror that its visual error serves

It is this precise breed of cassette tape horror that Kitty Horrorshow’s latest game latches onto brilliantly. It is there from the start. ANATOMY opens up with a sound most familiar to me: the flapping plastic of someone inserting a VHS tape into a machine and the whining electronics that play it. A blue screen then flashes before the feature begins. And when it does, and you recognize that you’re peering into this game world from a first-person perspective, you’ll see that the distorted scanlines of a corrupt VHS tape are obstructing your view. They will never leave you.

The effect here is to suggest that you’re viewing ANATOMY as if it were on a video cassette. This isn’t an empty call upon the analog glitch aesthetic that seems to be rising in popularity of late, it’s more than that. Horrorshow says in the description that ANATOMY has multiple endings and encourages you to replay it to experience them all. This isn’t quite true, as ANATOMY only really has one ending, it’s just that to get to it you’ll need to complete and restart the game a total of four times. Each return sees the tape having degraded further as it more fully realizes the terror that its visual error serves. You dig ever deeper into the chew of the tape.

Beyond its obstreperous formatting, ANATOMY tells a more traditional type of horror story. It’s the tale of a haunted house, or perhaps, a tale of all haunted houses. Your task inside the game, at least on the first playthrough, is to wander a very dark suburban house to find audio cassette tapes. They’re each located in a room that will unlock themselves one-by-one. While the lack of lighting is enough to keep you on your guard, holding your breath while somewhat frantically searching an unknown room for its tape, the voice on the tape is what fills you with dread time and again.

Upon finding each tape, you bring it back to the kitchen where, on the table, is placed a tape player. Inserting the tape will fill the room with a gloomy monologue, it being split across all these tapes, which explains how a house can have an anatomical structure to it, much like a human body. The living room might be the heart as it is the most likely to “beat” with activity, we are told. It typically goes that a room will be explained in this manner and then you’ll have to head off to that room in the game’s house to find the next tape. Without revealing too much, it is this structure that pushes your heart into your throat, as you become so expectant of something monstrous and frightening to be held within these rooms before you even reach them, let alone when you’re inside fumbling around in the black.

Whereas a lot of videogame horror lets you walk into a room and then have a monster spring out on you unexpectedly—a cheap scare—ANATOMY whispers in your ear that there’s probably a monster in a room before you enter it, letting your own expectations grind you down to a tense wreck of a person. That it does this again and again draws the debilitating effect out, masterfully building up the terror but constantly denying you the begging release of a scream. It’s the kind of horror that gets so deep into you that it seems to scratch away at your bones. I’d liken the effect to being dragged perpetually across a saw blade. That the re-recorded VHS format means you exit the game, feeling momentary relief, but then have to force yourself to re-enter this nightmare only multiplies the anxiety. You are Father Karras caught in an agonizing loop of listening to the curses of the devil—the telephone never rings.

You can purchase ANATOMY over on itch.io.