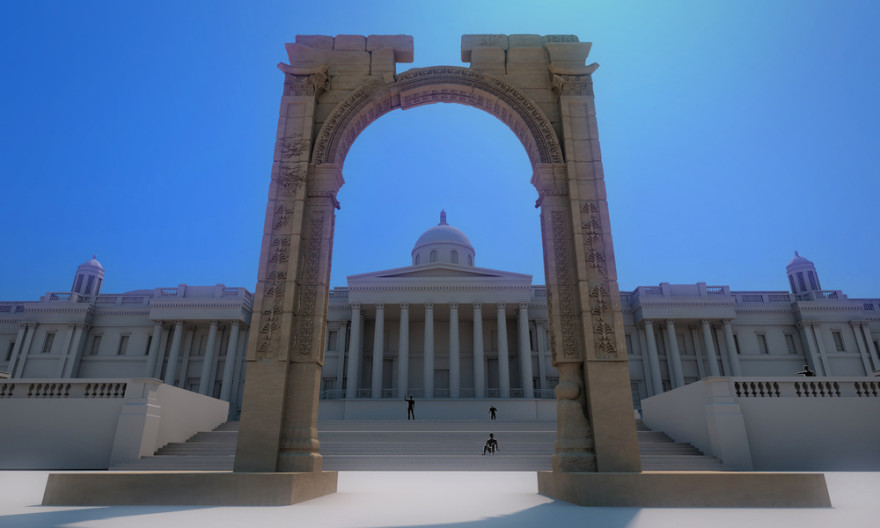 The issue of whether replicas in restoration are or should be desired is a hotly debated topic. With a replica of Palmyra’s Arch of Triumph, which was destroyed by Daesh (Isis) last October, being unveiled in Trafalgar Square as part of World Heritage Week, this debate is brought back into the fore. The restoration, which is spearheaded by The Institute of Digital Archaeology (IDA), is intended to be an act of symbolic defiance against terrorist acts of cultural destruction.

Deborah Lehr, who heads the Antiquities Coalition, a private advocacy organization in Washington, told NPR “Unlike other militant groups, the Islamic State has created a ‘Ministry of Antiquities’ in areas under its control. We’ve never seen it on this scale…” The idea behind this restoration project, in light of this unprecedented destruction, has been to highlight that because of technological advances, the loss of such cultural artefacts does not have the desired permanent affect which terrorists are leveraging. In his official statement, Roger Michel, the director of the IDA says:

“Monuments – as embodiments of history, religion, art and science – are significant and complex repositories of cultural narratives. No one should consider for one second giving terrorists the power to delete such objects from our collective cultural record. When history is erased in this fashion, it must be promptly and, of course, thoughtfully restored.”

“I think archaeologists should stay out of this”

However there have been critics of the restoration, who raise concerns with the project’s intentions and outcome. The political elements at play in this are considerably complex. As Mark Altaweel, a near-east specialist from the UCL Institute of Archaeology, told IBTimes UK, “I think archaeologists should stay out of this, it would seem ridiculous to rebuild the site in the middle of a civil war but – that said – ultimately it is a Syrian decision to take”. There are also the ethics involved with creating a restoration which is completely artificial, with no tangible link to the original historical site, other than its appearance. If this is to become a larger scale restoration of the Palmyra area, it is not something which can be undertaken lightly.


This is not the first time that high tech restorations of destroyed cultural items has been publicly undertaken. When hearing about this story I was immediately reminded of the 3D light projection last year which was used to temporarily “resurrect” The Buddhas of Bamiyan, which were destroyed by the Taliban in 2001. Although this project was privately pursued and funded, it was done with governmental and UNESCO support. The IDA are also not the only ones currently pursuing the issue of pressing archaeological preservation through technology. Project Mosul has sought to create 3D images of various, now lost, artefacts.

As complex as these issues of restoration are, in terms of their politics and ethics, what this project shows is that we are eager to use our newer technologies to assist us with bringing back what has been lost. This concept begins to cross over into what’s called “virtual heritage” and the possibilities are so much greater than your average digital tour of a museum.