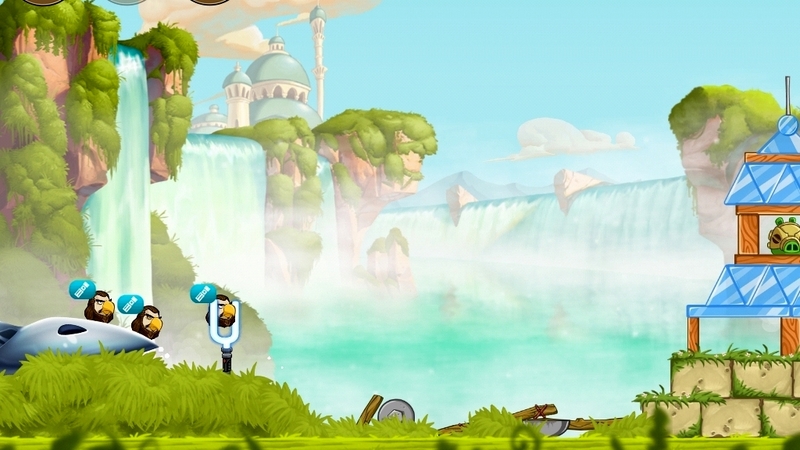 Video games and their innumerable sequels often follow the credo of “if it ain’t broke, don’t fix it.” One has only to look at the furious response from Zelda fanatics when it was announced that in the 3DS Link Between Worlds, players would be able to rent key devices like hookshots and iron boots from a store rather than duking it out with mini-bosses. Messing with a proven game formula usually leads to a PR emergency. But fear not! Angry Birds Star Wars II doesn’t rock the boat. Not that you expected it to, anyway.

Angry Birds Star Wars II doesn’t rock the boat. Not that you expected it to, anyway

Following up on the original Angry Birds Star Wars released last year, this sequel sticks with the tried-and-true mechanic of flinging birds at pigs, only this time in space. And not just the space of Angry Birds Space (March 2012). This intergalactic arena is heavily branded with Lucasian flourishes: worlds like Naboo and Tatooine, light sabers, pod racers, piggie Sith Lords, and cut scenes that loosely summarize the events of the three posthumous Star Wars prequels.

One cannot say “prequel” without conjuring images of a floppy-eared, possibly racist reptile creature, and to answer the question: yes, Jar-Jar Binks does make an appearance. The chief innovation of Angry Birds Star Wars II is to introduce a slew of new bird types, and Jar-Jar is actually one of the most interesting. He can shoot out a kind of laser hook-shot that grips on to whatever surface the player taps and swings the character in an arc. Another tap will release Jar-Jar, sending him crashing into an enemy tower.

Let’s call this, then, the beauty of iteration. Like Pokemon X/Y, which ups the ante with a third dimension, more battle strategies, and better Pokemon-trainer relationships without changing the basic mechanics one bit, Angry Birds Star Wars II adds new material that expands on the still-magical original concept without fundamemtally altering it.

Games like these partake of the beauty of haiku or calligraphy: Careful, subtle iteration on a very limited form creates a kind of minimalist grandeur. The new wrinkles of Angry Birds Star Wars II are like the unique twists and curves of a Chinese ink painter’s brush. We all know what the subject’s going to be; it’s the execution we’re interested in.

Among the other subtle shifts in line-width are Han Solo, who shoots out multiple reflective gun lasers, Anakin, whose pod-racer rockets into any point on the screen, and C-3PO, who anxiously explodes into golden projectiles. New level mechanics—like magnets and a particularly compelling underwater environment—help keep the game interesting, even for players long desensitized to the series. These additions show Rovio being smart about their franchise as it makes its way into the history books.

Classic games iterate and innovate gradually. Super Mario, after all, is just an encyclopedia of riffs on the concept of moving from left to right. For its unprecedented omnipresence, Angry Birds is the 21st century’s answer to the plumber, and Rovio is following closely in Nintendo’s footsteps. Having produced a handful of games that follow the same basic premise, the company has announced Angry Birds Go, a kart racer. Sound familiar? The original Mario Bros. launched on the NES in 1985; Mario Kart followed on the Super Nintendo in 1992, and launched a whole new juggernaut.

It’s easy to argue that Angry Birds is already played out, that it used up any originality it had going for it and has since become a cliche. But maybe that quality, less cliché than archetypal, is exactly what makes Angry Birds a series with such staying power. Rovio understands the power of iteration.