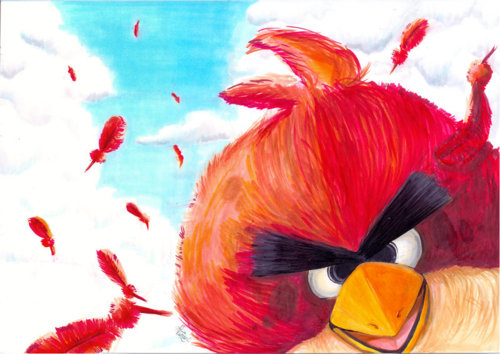 Probably the easiest way of telling whether or not someone has an addictive personality is to hand them a copy of Angry Birds and see what happens. Now, a Chinese foods maker is hoping that same tendency carries over to snack, with their introduction of Angry Birds mooncakes, reports The New York Daily News.

“The Angry Birds game is a world phenomenon now, it is well-liked by people from three-year-olds to 80-year-olds.” said Stephanie Chan, marketing manager of Maxim’s Group, which released the bird-shaped mooncakes.

The mooncakes come in two flavours, chocolate, and mango and pomelo, and sell at HK$38 ($4.90) per pair, making their debut at the Hong Kong Food Expo on Sunday where they were immediately snapped up by fans. “I come here to buy the mooncakes because I like playing the game,” said an excited Kiki Au, a seven-year-old primary school student.

Though mooncakes are strictly a Chinese snacking tradition, don’t be surprised if they make their way to the US, like a giant yellow bird bursting through a behelmeted, ovular pig.