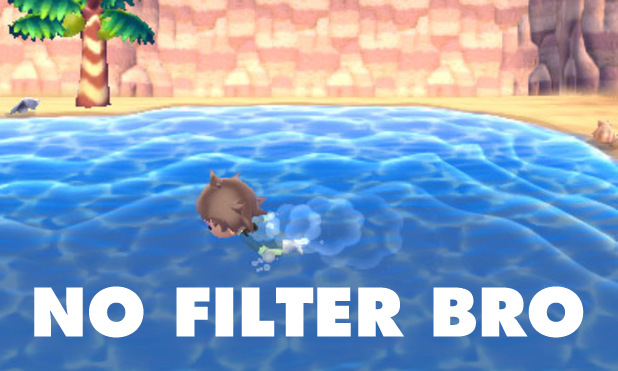 Share pictures with friends. Shape your identify however you see fit. Learn more about strangers than you ever thought possible. Time ticks by; seconds turn to hours; you’ve wasted the better part of a day. On some granular level, you question whether the effort was worth it. You’ll be back tomorrow.

This is no description of Facebook or Twitter or Instagram, though you’d be forgiven for thinking so. This is the latest social experiment to sweep through the masses in tidal fashion. This is Animal Crossing: New Leaf, Nintendo’s clandestine answer to online community and their own accidental social network.

Animal Crossing began life in 2001 as a Nintendo 64 game released in Japan only. Though something of a life simulation, this felt different from The Sims. You lived amongst animals in a charming village. You paid off your mortgage by doing chores for neighbors and selling fruit at the market. There are no goals outside of those set by yourself. Buy a shovel and dig holes in arresting shapes. Furnish your house with eclectic furniture, arranged for maximum feng shui.

There are no goals outside of those set by yourself.

Within a year the game would come out in North America on the new GameCube, using that system’s built-in clock as a way to track time. When you played in October, the leaves changed color and fell from trees. In December snow would cover the ground. Turn the game on at 5:00 PM and your villagers bustle around, catching bugs in nets or whistling while out for a stroll. Play at 2:00 AM, though, and most houses are dark, with only the chirping cicadas to keep you company.

In March of 2002, six months before Animal Crossing would launch in the West, a site called Friendster went live. It’s difficult to imagine this now, but at the time the concept was a revolution: You built a profile of yourself, grew a network of friends and shared your interests. Friendster was the first of the social networks to boom, gathering over three million users in a fiscal quarter. It was also the first to bust. The following year brought Myspace, and then Facebook, the latter of which still holds as the de facto social site with now over 1 billion (with a “b”) members.

Friendster crumbled but didn’t go away. In fact it’s been relaunched as a social gaming site with a huge following in Asia. It isn’t the only product of 2002 to be reborn as something far grander than its original design intended. For with Nintendo’s release of Animal Crossing: New Leaf, they have inadvertently dipped their toes in the social networking waters, not by providing their own platform, but by using pre-existing networks to proclaim AC’s inimitable glory. Twitter is the shark; Animal Crossing: New Leaf is the lamprey, along for the ride and growing stronger.

Documentation for the GameCube original described it as a “communication game.” This came from being able to leave notes for other players in your same town, with save files on your same game disc. The idea was for Brother John to play after school, and then Mother Sally to play later on, who would see what John had done to their shared village. Since the game worked on a single, real-time clock, there was a persistence to the experience that other two-player games of the era lacked.

Documentation for the GameCube original described it as a “communication game.”

Cut to 2013. With Animal Crossing: New Leaf on the Nintendo 3DS, what was once a village confined to your family or friends (you could take a GameCube memory card and pop it into a friend’s system), now expands to just about anyone in the world. In certain ways this level of interactivity is the same for all online games, a reality for decades. But Animal Crossing’s focus on personalization and the overall timbre of the experience gives it a warmth and idiosyncrasy much closer to your OKCupid profile than playing WoW with your guild.

Enthusiasts have made their love known. Some players maintain a diary of play; since the game exists on the same calendar year as the player, such journaling parallels Facebook’s Timeline feature, only boiled down and focused, existing within your game’s reality. Others create objects for fellow players to share and use; some create themed outfits, like these from Moonrise Kingdom. In this way, Animal Crossing is a self-contained Etsy.

Animal Crossing‘s focus on personalization gives it a warmth and idiosyncrasy much closer to your OKCupid Profile.

Feeling down? You could post something melancholy to your Tumblr, a wilted black rose or Morrissey lyrics… or be like Andy here and end everything in dramatic fashion.

As you pay off your house and adorn it with astronaut suits and holodecks, pinball machines and Samus helmets, desk chairs made from balloons and Roman statues, you build up an identity unique to your proclivities. Then snap an in-game photo and share it on Twitter by using the 3DS’s browser. There’s even a photo booth on Main Street, north of your village, where you enter and pay to have a picture taken for your personal ID card.

Animal Crossing is a changing, organic locale, encased on silicon but spreading like spilt water. Sony attempted the same with PlayStation Home, a service lambasted by casual observers but still serving over 30 million players (according to Sony). But Home was meant to be transformative, a Second Life for console owners. Marred by lag and crashes, it never quite gained the all-consuming traction Sony expected. When promised a parade, a quaint walk down the road feels lackluster.

Nintendo undersold and overdelivered: They promised a game and created a world. If you haven’t visited yet, be wary; you may not want to return.