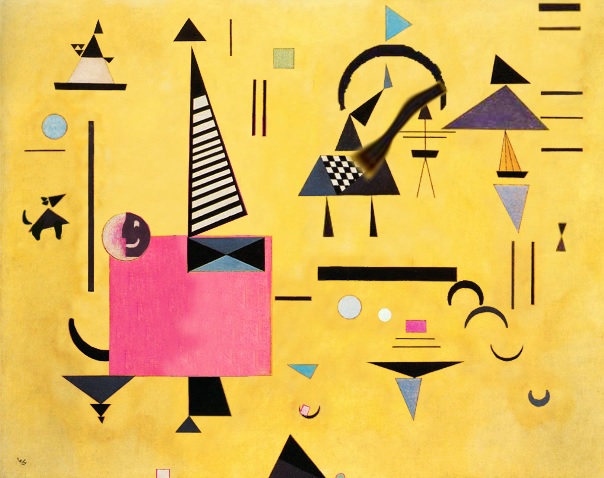 I’ve wrecked it. Kandinsky’s 1932 abstract composition “Decisive Pink,” a treasured oil painting on canvas, is a mess. One of the black triangles has fell to the bottom, and the series of crescents have sneezed so many times they’ve probably developed a hernia. This is what happens when you play with a painting.

I blame Nivetha Kannan and Sarah Kwan for making me do this. Both are students at Carnegie Mellon University. Together, they worked on a project to explore “the relationship between traditional abstract art and current animation.” The result is called Animated Kandinsky, and it adds interactive elements to Kandinsky’s “Decisive Pink,” so that you can bring the geometric shapes of his painting to life.

see the shapes transform into a single entity

It’s all done by clicking. See a shape, bring your cursor over to it, and press your finger against the mouse button. Doing so will see the shapes transform into a single entity with sounds complementing its realization. Two triangles grow ears and a tail to become a happy dog. A curved line acts as if you’ve plucked a guitar string, reverberating the sound. There are snarling teeth, a cheeky face in a moon, and a baby bird pops out of an envelope.

It’s surprising and delightful, feeding your curiosity with each new reveal—you may even try to guess what the shapes will become before you click on them. But, more than this, I found that characterizing the collection of shapes in “Decisive Pink,” dividing them into individual bodies, has brought me closer to the painting. And it’s in this that I see potential.

Yako Rabinovich says, specifically of Kandinsky’s geometric paintings, that reproductions of them can be difficult to appreciate when studied. “The beauty of Kandinsky’s early abstractions is muffled out of sight unless one stands before the original, and even then one must stand as close to it as the painter did when creating it. Then only can one appreciate the juxtapositions, fusions and transitions of color.” Rabinovich claims that reproductions lack the “enameled texture” of the original, that is, the scratches of the brush and the subtle drips of the paint. It’s a flat image that struggles to give the full impression due to its reduced surface.

it entices the imagination to work with it

On top of that, studying paintings can be arduous for some, perhaps even uninspiring. Here we have then, with Kannan and Kwan’s interactive interpretation, a way to make more accessible the intimacies of a piece of art. Our current world is different to the one that Kandinsky painted within. We’ve been spoiled by TVs and monitors, and so visuals without animation may seem dead to some of us, so why not enliven them with characters and sounds if we can?

This wouldn’t work for every painting in existence, sure. It works especially well with abstract art as it entices the imagination to work with it, to see the forms contained within—it is already playful. But, if our interest in art is waning, perhaps a way of making us pay attention to it once again is to infuse it with interactive play. Just a thought.

You can play Animated Kandinsky for free on itch.io.