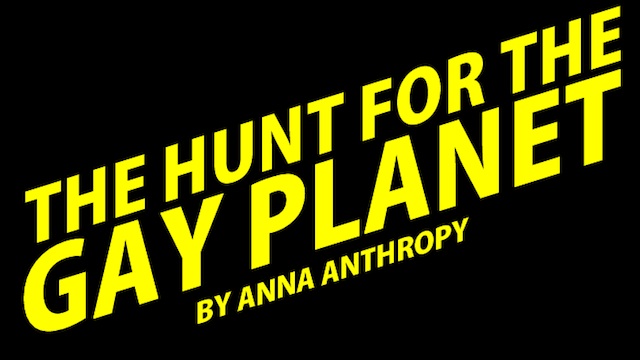 In case you dismissed as outright lunacy BioWare’s facepalm-worthy decision to create a separate planet for gay and lesbian players in Star Wars: The Old Republic, queer game author Anna Anthropy has made a game to remind you of it.

The Hunt for the Gay Planet is a quick, quirky text adventure about a queer pilot on a mission to find the gay planet of Makeb, which according to the Wookieepedia was a planet inhabited by Jabba and his Cartel during the Second Galactic War. As you know if you played the elegantly-put Dys4ia, a game which deals with Anna’s struggles with finding acceptance as a transgendered person, Anna is an authority at expressing personal, sometimes political, statements through game rhetoric. No exception, Gay Planet makes its censures with tact and satire. (She also makes totally apolitical games, such as a killer game about climbing a mountain of skulls on her site.)

No one should have to pay extra for a character that matches their sexual orientation.

Anna’s criticisms are obvious. No one should have to pay extra for a character that matches their sexual orientation, and then be placed in the ghetto for it. Over email, Anna describes the business practices as insulting and exploitative.

“BioWare has successfully identified a game-playing population so desperate for any form of representation that people will throw money at them just for the promise of the most tokenized characters and experiences,” she says.

“Nowhere is this clearer than in the case of the Old Republic’s gay planet,” she continues, “which asks queer players to pay for the privilege of inhabiting a tiny, tokenized corner of a willfully heteronormative game world.”

Though her spoof is quite funny, the jokes come at BioWare’s expense. The story places the player in the role of a homosexual Buck Rogers type who is exploring the galaxy in search of the fabled gay celestial body. In a grotto on a desolate planet, you choose from a glut of very confusing options. It’s a touch of irony that derides the jumping through hoops that a queer player must do to be queer in the game. Should you go north, northeast, east, southeast, south, southwest, west, or maybe northwest? The solution is in no way clear.

Nor are the answers to the questions Anna presents. Why should LGB people have to relocate to a distant planet that is segregated from the main population, only to play out a role that is practically a straight one in every aspect except sexuality? “The content of BioWare games doesn’t reflect a queer narrative,” she says. “It’s a simple edit of the straight script that enables BioWare to market its pap to a slightly wider audience.”

Her point isn’t only that the gay planet is patronizing to gay players, but that BioWare is playing lip service to the community. Generally speaking, for most of their history, videogames have been dominated by white straight male characters, offering anyone who falls outside the bounds of that demographic few options when it comes to playing as a character they can identify with. Anna points to a seemingly universal offense among game makers: When confronted with the opportunity to have diverse characters in their games, they simply exchange white skin for brown skin, or burly biceps for a busty bosom, without giving due consideration to the way a black lesbian would actually act in the world of a game.

Of course, BioWare’s actions are defenseless here, and I won’t even pretend that they aren’t for the sake of argument, but there is a broader issue at play than the Old Republic’s gay slums. Games need to become more personal, because these ridiculous overbearing stereotypes become extremely apparent as technology advances.