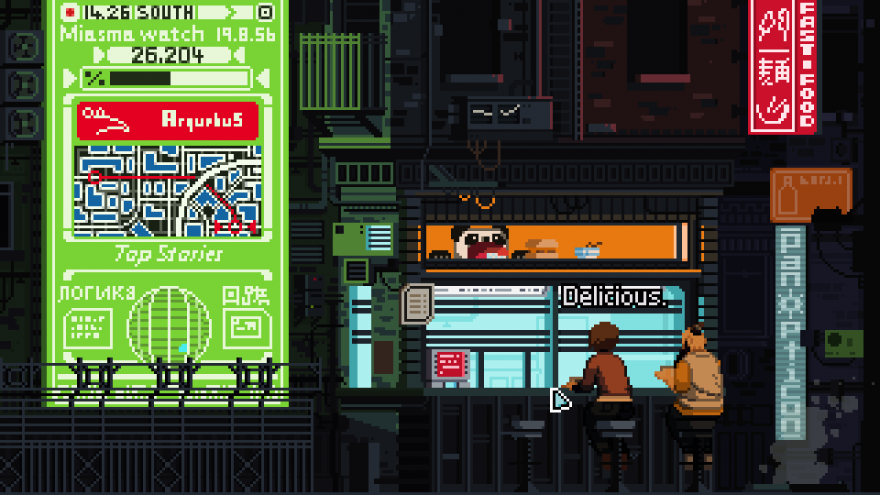 Cyberpunk worlds always seem to draw me in. Whether it’s the derelict planets visited by Spike Spiegel and his bounty hunting companions in the cult classic anime Cowboy Bebop (1997-98), or the replicant-laden world of the famed Blade Runner (1982), cyberpunk has always remained a static aesthetic in the media I’ve read, watched, and played. And freelance pixel artist Matt Frith’s bite-sized cyberpunk point-and-click adventure game Among Thorns is no exception.

The setting in Among Thorns is described on as “a world suffering with a technological plague, Cora Bry is recruited for a shady job.” So, essentially, a textbook example of any cyberpunk narrative. There’s the gloomy and rainy neon-accented city, and the stoic, brooding anti-hero. In the game, the player manages an inventory and talks to artificial characters, all animated in Frith’s distinct and stylish pixel art. Among Thorns is only the latest in a recent renaissance of the point-and-click adventure genre, specifically of the perpetually-cool cyberpunk variety.

The cyberpunk adventure genre was in part spearheaded by none other than Hideo Kojima (of Metal Gear Solid fame) with his early game Snatcher (1988)—it should come as no surprise that it’s a closely-leaning “homage” to Blade Runner. In more recent times, the pixel-y cyberpunk adventure genre has resurged. The Neo-San Francisco set Read Only Memories (2015) was a similar step into the cyberpunk adventure field as Among Thorns’ has done in its brief venture. Yet Read Only Memories wasn’t a lone wolf in the resurgence of the genre, because of a slew of upcoming releases, including Odd Tales’ hauntingly beautiful pixel platformer The Last Night. Joining The Last Night in cyberpunk goodness is the upcoming VA-11 HALL-A, which promises less of the adventuring bits, but replaces it with “bartending action,” and exists within a similar realm of neon-tinged, post-dystopian life.

The marriage of pixel art and cyberpunk has never felt out of place. Especially in modern times, where pixels are a stylistic relic of gaming’s past. In a similar sense with cyberpunk, architecture is often reminiscent of the grimiest of today’s cities, usually with a futuristic perk. Both pixel art and cyberpunk present throwbacks to the past in a bleak, yet noteworthy way. Frith’s marriage of cyberpunk and his well-regarded pixel art in Among Thorns is no exception.

Experience the technological plague in Among Thorns on itch.io here, and if you donate, there’s a higher chance for Frith to create a potential sequel – one that’s even longer.