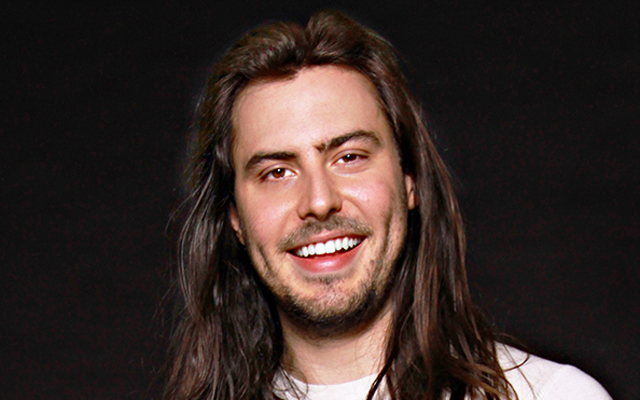 In concert, Andrew W.K. plays a guitar that looks like a piece of pizza. He will rave about how someone has vomited on his leg, describing the food particles he could see (corn, peas). At one point during his show in New York’s Webster Hall, he asked the audience if they liked burritos. The consensus seemed to be a resounding “Yes!”

It’s become vaguely uncertain, on the internet, whether or not Andrew W.K. is actually a genuine person or a commercially-minded work of performance art—a character simply played by whomever is willing to wear all white and get thrown up on. I should mention that Andrew W.K. is one of my personal heroes. I enjoy his music a lot, find him one of the most erudite thinkers in rock music, and his views on pinball are thought-provoking. Yet I actually have no idea who Andrew W.K. is. I assume the “real” Andrew W.K. is more or less the same guy who sat in front of me talking about pinball machine designer Pat Lawlor for 30 minutes, give or take an all-white ensemble. There are many people who would not believe this.

Many hiding in the fathoms of the internet have become certain that someone is in Andrew W.K.’s head.

There is the incident in 2004, where Andrew ended a concert early, fleeing the venue with no explanation. There is the time that W.K., seemingly under duress before giving a talk in the United Kingdom, claimed, “I am the next person ‘playing’ Andrew W.K.” (To be fair, he was probably—probably—speaking figuratively, though it does make for one hell of a soundbite.) The question now is: Who, if anyone, is behind Andrew W.K., and why don’t they want to make themselves known? Uncovering this has become something of a metagame, a House of Leaves-style plumbing of clues that may or may not be there, people following a trail of breadcrumbs until they lose themselves completely.

Many hiding in the fathoms of the internet have become certain that someone is in Andrew W.K.’s head, playing him like a game character who looks and acts real, but has no agency over himself. They think that he and “someone” have a very explicit agent/actor relationship, and that someone has a very vested interest in secretly governing his musical direction, directing his lyrical content, and sculpting his public persona. Andrew W.K. seems totally fine with people thinking this—in his interviews, he will allude to certain histories that could allow people to believe it’s all true.

The idea that W.K. is not who he says he is—or that he could claim this, and we would believe him—is completely fucking terrifying. We don’t like to think it’s possible to be eaten up by the system. I think back to college friends allowing themselves to get sucked into World of Warcraft, or when my friend Tyler and I spent an entire semester playing Tony Hawk’s Pro Skater, skipping classes, neglecting human life, and basically giving up everything for the prospect of landing a million-point trick. But if we didn’t obsess over stuff, we wouldn’t have made it to the moon, or built the pyramids, or made Season Four of The Wire. It’s inevitable that sometimes we disappear down the wrong rabbit hole.

In retrospect, it’s hard not to be suspicious of Andrew W.K. The way he burst onto the scene in 2001 felt a tad disingenuous. This was the bio W.K. was given at birth: He was a former child piano prodigy who looked like a model, wore all white, and previously made music that sounded like Gary Wilson’s take on arena rock. He was ostensibly a genius, but all he wanted to talk about was partying. He used to be signed to a noise label, but now made super-uplifting heavy metal that sounded like various riffs on a sound that was a combination of Metallica, Rodgers & Hammerstein, and Meatloaf. “Party Hard,” the first single from I Get Wet, his debut album, ended up on the Madden NFL 2003 soundtrack. Some people loved him, but others were deeply suspicious. Former noise musicians would not go for the obvious chord changes. They would not consent to having their songs show up on the Madden soundtrack. Some people thought W.K. was Foo Fighters frontman Dave Grohl in disguise, because Grohl seems like the type of guy who would do that sort of thing. Other people, well, other people thought about Steev Mike.

It’s inevitable that sometimes we disappear down the wrong rabbit hole.

The thing about Andrew W.K.’s persona is that there is actually some weird stuff going on, and that’s just unimpeachable: Bulb, the noise label that issued his early, more outsider-y EPs, put out a record by an entity named Steev Mike in like 1992. That name is way too dumb to be real. I Get Wet listed Steev Mike as an executive producer. When asked who Steev Mike is in interviews, W.K. always says something to the effect of, “Steev Mike is a group of people who don’t want to be named, and I can’t really talk about it.” It did not help that someone began posting messages on the internet as “Steev Mike,” claiming that W.K. had essentially “gone rogue” and was trying to escape his mysterious overlords. If you want a very comprehensive, paranoid account of the saga, read it here, though I will warn you that the site contains nudity for no discernible reason.

Indeed, people tend to create mysteries where there are none, creating their own win and lose conditions. Think of the myriad theories about the JFK assassination, or UFOs, or the thought that Elvis is still alive. Leading yourself into a maze, imagining you are figuring out the secret to Andrew W.K.’s (perhaps nonexistent) sinister past, and maybe getting lost, feels like you’re accomplishing something. You feel closer to whatever you’re pursuing. It’s the feeling Andrew W.K. tries to cultivate through his music and his live performances—this sort of intense closeness that you feel toward a stranger for reasons you don’t totally understand. And maybe that’s the point of Andrew W.K., even if he is slightly disingenuous—in order to have a true relationship with culture, you’ve got to let it consume you.