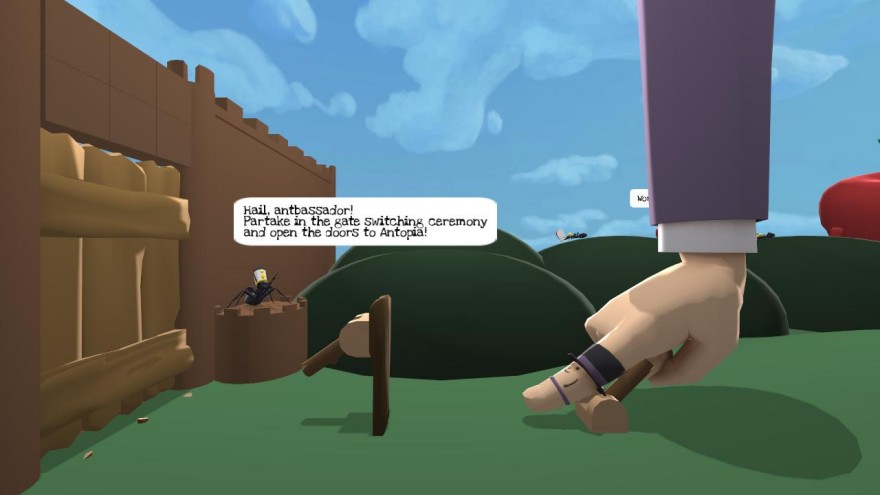 When I first played Antbassador, I had no idea who had created it, although I did recognize a couple of the author’s names. Then: “Haha. Those are our guys,” Phil Tibotoski of Young Horses reveals when I publicly share my enthusiasm for the game.

Of course it is! It’s the Ludum Dare 30 game jam entry of four members of the team that created Octodad: Dadliest Catch. It couldn’t have been anyone else. You can see it’s them in the floppy finger that you control in Antbassador. You can feel them as you battle with your mouse to assemble some control over this clumsy appendage. The team is right there in the game’s slapstick humor as you accidentally crush an ant with a sloppy prod.

suggesting that the body is capable of machinations separate from the mind.

Not only that, but in Antbassador, you play as a face and top hat drawn so blindingly obvious onto someone’s index finger. It’s such a futile disguise, yet, despite the clarity of the deception, the kingdom of ants that you visit is oblivious to it. They seem to be convinced that you are some rare breed of official ant that has come down from Antopia, your apparent “kingdom in the sky”, to bring peace to the land.

The similarities between this narrative set-up and Octodad‘s—a fatherly octopus slips around in a suit somehow convincing everyone that he’s a normal human—shouldn’t need to be pointed out. Both games also share in providing you a number of small activities to perform, constantly upping the delicate touch you need to manipulate the finger without accident.

Of course, the jokes that Young Horses use are also the same. It’s a rare type of humor found in videogames; one that acknowledges the jankiness of their form. The comedy is found in the failure of the player to coerce with the game’s controls, and the visual buffoonery that causes. It’s a big risk to take as frustration can so easily be the result of this deliberately awkward interaction, as opposed to the intended laughter.

For the most part, the frustration in both Octodad and Antbassador is kept to a steady rein, but it’s certainly not absent. When you’re asked to knock the hats off of the heads of two squabbling soldier ants, it’s too easy to fail. Likewise, when trying to open the entrance gate into the fort, it’s more of a tiring chore rather than something to laugh about. After several minutes I was just smashing the finger against the switch in desperation (you need to hold the mouse button down and hook it from underneath).

This humoral comedy isn’t unique to videogames. It has been particularly prevalent in cartoon sketches and animation that features impossibly bendy and damage-resistant bodies. In Antbassador‘s case, we see a finger personified, given a form of enlivened agency, suggesting that the body is capable of machinations separate from the mind.

This type of comedy teeters on a Cartesian Moment, provoking us to question the capabilities of our bodies and our mortal bindings to them. To put it in a less grim way, Antbassador and its breed of comedy has us connect with our imagination: I bet you’ve pretended that your fingers are little people before now, haven’t you?

We can relate to Antbassador through the playful personifications of our bodies that we may look upon as being silly, but are actually important thought experiments when growing up; that’s probably the game’s greatest comedic achievement.

You can download Antbassador for free using the links provided on its Ludum Dare page.