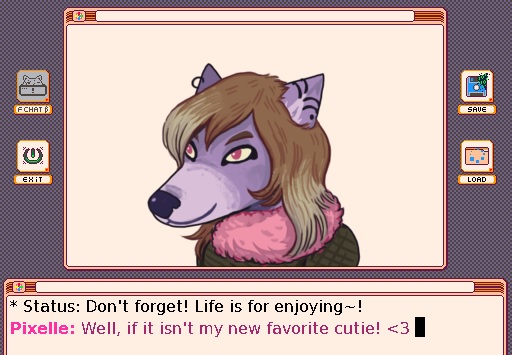 Dial-up modems, Windows 95 floppies, IRC channels, and free American Online disks. Ask anyone who lived through the internet boom of the ‘90s and these are guaranteed to be some of the first things that come to mind. But for New York-based game developer J.C. Holder, who uses they/them pronouns, there was another aspect of their identity that marked growing up online: the anthropomorphic furry community.

Holder’s upcoming game, Anthrotari, is a visual novel that casts the player in the role of a furry roleplayer named Alex. Through IRC channels, Alex hangs out with a group of anthros across the nation—doing everything from traditional Dungeons & Dragons-esque roleplay, to flirting with other furries.

“If anything owes a lot to my personal experience, it’s the design of Alex, the player character,” Holder said. “Like them, I also grew up more on the internet than off it, discovered my first real community among furry roleplayers online, and spent a span of time in the woods mostly alone with a computer.”

Issues of belonging and loneliness are running themes

But Anthrotari is particularly interested in queer and trans roleplayers’ coming of age through the anthro identity. After all, nearly 20 years later, many queer members of the furry community built their first sense of belonging through anthro roleplaying. Holder looks to capture that through the wide range of character identities found in the game.

“Our cast of characters are all queer furries: they’re varying combinations of genderqueer, transgender, cisgender, gay, pansexual, and asexual,” Holder explained. “I’m fortunate enough to have enough experience with such identities, personally or through friends, to have made their respectful inclusion an approachable task.”

Anthrotari handles queer identities quite gracefully as well. Flirting happens naturally in the IRC, with Alex essentially surrounded by a cast of queer and trans furries to chat with. Issues of belonging and loneliness are running themes throughout each character’s route, too, as each of Alex’s friends cherish the time they spend together when they’re online. The game hopes to explore these questions of identity in more detail in the game’s full version.

Originally created for the second installment of the International Love Ultimatum game jam (or ILUJam) in June, the game’s early demo launched with hours to spare. Now that the jam is over, Holder and their team look to finish each game’s routes. But, if time and resources allow, the crew is also interested in expanding the game with more stories to explore. “There’s room for more and no end of other queer identities to represent,” Holder said.

In the meantime, feel free to check out the Anthrotari ILUJam demo on the game’s itch.io page. Players interested in supporting the game can do so through J.C. Holder’s Patreon, and there’s also a mailing list to stay updated with the game’s progress over at the official Anthrotari website.