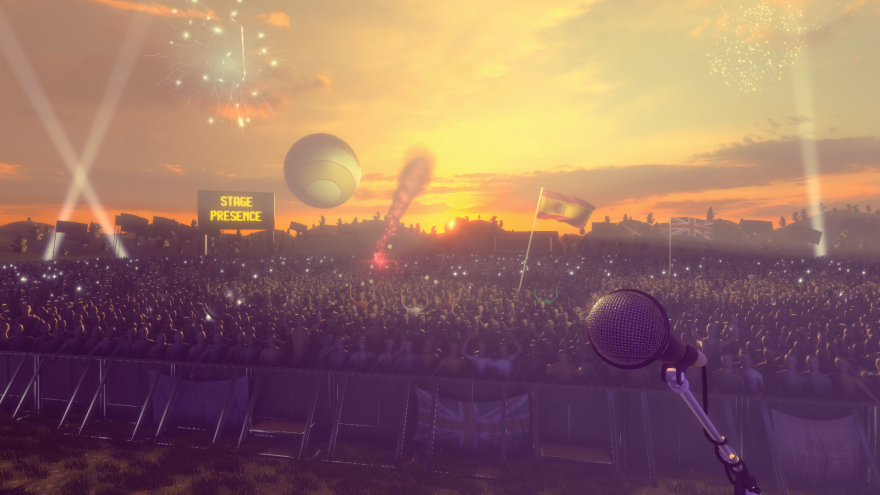 Stage Presence is karaoke with less musicality and more social anxiety, and really, what’s not to like about that?

You play as the frontman of a band. You’re on stage at a large festival—think Glastonbury, but without the ambient fug—when something goes wrong. Who knows what went wrong. This is the musical version of Apollo 13: You are not afforded the luxury of thinking about anything other than your current predicament.

Stage Presence has you focus on the task of surviving this calamity. You use the microphone to desperately vamp as a countdown until the resolution of your band’s technical issues is projected behind the waiting crowd. You can hear your band’s manager egging you on, pleading with you to keep the huddled masses happy. And you should keep them happy; that’s the game’s win condition and even if it wasn’t, dealing with the wrath of an unruly crowd sounds plenty unpleasant. (If you’d like to see even more of the unruly crowd, Stage Presence can be played in VR mode with an Oculus Rift. The game’s designer, John Dadley, claims that support for other headsets is forthcoming.)

Why would you want to put yourself through this? That nightmare where you somehow show up to work without your pants on doesn’t really need to be reproduced in other media forms. And yet here we are. Stage Presence cuts out all of life’s bullshit to focus exclusively on that moment where your life flashes before your eyes. Going out on stage, as games such as Leave ’em Laughing have suggested, is an activity for those with a death wish. It’s skydiving for those who believe desirable sounds can come out of their mouths. As Sean Connery’s Mac points out in Entrapment, “If you can’t feel alive now, you never will.”