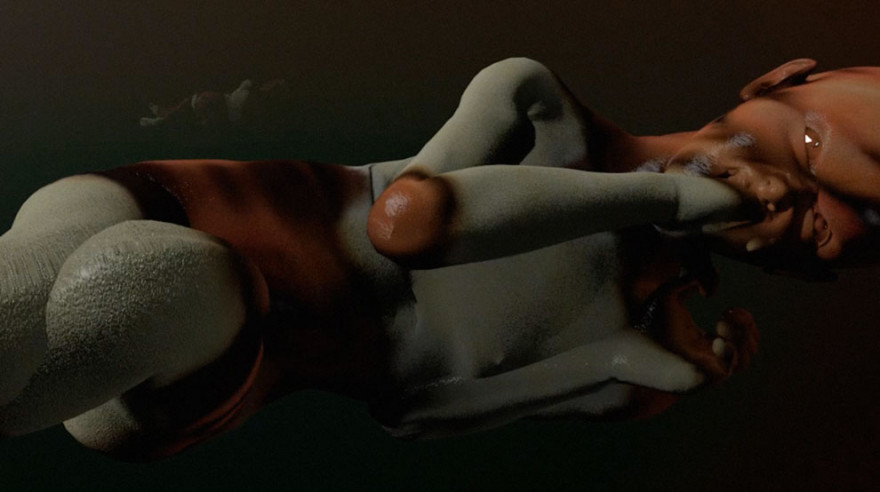 Richard D. James (better known as Aphex Twin) has often seen his songs associated with disturbing, warped bodies. In the early ’90s, the label he co-founded and that produced his music, Rephlex Records, described his style as “braindance.” Pitchfork‘s Paul Cooper wrote about this terminology in 2002, saying that “‘braindance’ escaped the mind/body binary opposition of electronic music– here was a rhythmically hyper, complex genre that retained its club roots by appending fantastically supple limbs to the listener’s fervid imagination.”

The corporeal imagery conjured there is hardly an embellishment on Cooper’s part. By that time, the music videos directed by experimental film maker Chris Cunningham for Aphex Twin’s songs “Come to Daddy” and “Windowlicker” were years old. Cunningham brought to life James’s plastering of his own leering face on the covers of his CDs where it remains intensely and eternally menacing. In those videos, that fixated stare becomes a mask, superimposed on other people’s bodies, snarling and stretching into demonic portraits that make you ill with nightmares.

Cunningham took this contortion of the human body further with his experimental short film “Rubber Johnny.” In it, a hydrocephalic teenager stuck nude in a wheelchair contorts limbs and flesh to the erratic snare rushes and cacophonous electronic twitches of Aphex Twin’s song Afx237 v.7 (from his album “Drukqs,” which the video was originally being made for as a TV advert) as part of a bizarre, lonely rave.

a puddle of melted skin, bone, and hair

After being slapped by a disapproving father and snorting a line of cocaine, the titular Johnny sporadically morphs into a mess of deformed limbs amid black space, distorting himself into new knots before you have time to take any of it in. This is followed by a section in which he is seen repeatedly pressed against glass in new positions. He’s squashed to resemble a puddle of melted skin, bone, and hair; sentient offal. The only sign of life is the mouth that screams between tongue and teeth to match the breakdown of the music, which by this point has reduced to jarred computer error sounds. Where the music transgresses standards in form and meter so, too, does the physical body.

The association here is more than a unity of body and mind, as Cooper previously said, but also of flesh and technology—the former’s behavior conducted by the sounds of the latter into a horrifying performance. And it’s this that Mau Morgó captures in his tribute to Aphex Twin’s music (specifically the track Alberto Balsam as it plays throughout) and Cunningham’s videos, which he’s titled “I did this for Richard D. James, but he doesn’t know.”

Morgó explains that this project was commissioned by someone but they never published the finished work. And so, a year and a half after having completed it, Morgó has published it himself. It comes with a brief description: “Rubber Johnny also has dreams. He is not in a wheelchair. He may run or fight them, but they will always be with him.”

You can interpret the video as you wish but, with this description, the popular reading will probably be that this is Rubber Johnny having a beautiful if strange dream. It makes sense if you roll with that as he appears to enjoy the physical flexibility that the dream enables beyond his restricted state during consciousness. And it’s a great concept to realize in 3D modelling and animation software as it makes that connection between bodies and technology that has always orbited Aphex Twin’s music—whether in our own minds while listening, or realized in Cunningham’s music videos—much more immediate, and unites them in dance.