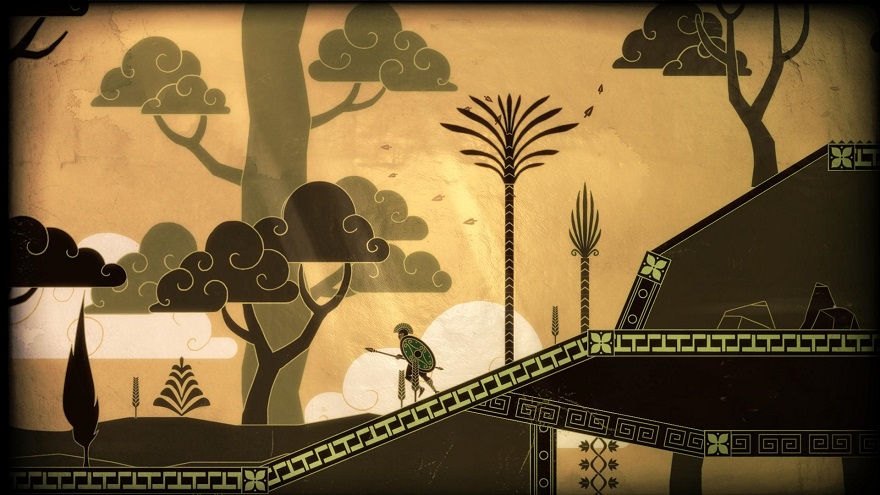 Before Apotheon was Apotheon, it was a sci-fi, side scrolling, Greeks-in-space adventure game. Alientrap’s Lee Vermeulen and Jesse McGibney set out to make something similar to Capsized, their well-received platformer set on a lush alien world, and ended up ditching the solar system completely and heading up Mount Olympus. What has resulted is a gorgeous, open-world RPG inspired by the simplistic beauty of black-figure pottery and the wealth of mythology stored within Greek history.

When Vermeulen and McGibney began their research for Apotheon, they found the Greek art style as a whole relatively untouched. The complex meanders and character-based artwork that we associate so much with Ancient Greece have never really been used to their full potential in animation. Gaming was almost devoid of it.

“I was looking around for a long time for just other, I guess, modern medias that had tried to do the same kind of thing. And there really wasn’t anything. Like I said, it’s (Disney’s) Hercules and Rock of Ages. And some other really small indie titles. But it’s not really a style that’s been attempted that much.” Vermeulen explained. “There’s tons of just really cool art styles that, you know, in and of themselves are ripe for making games out of. The art style and the history and the storytelling and everything, it’s all a goldmine.”

As far back as cave paintings, we’ve been telling stories of epic battles and heroic feats through artwork. Hieroglyphics, mosaics, friezes, and tapestries, all rich with detail and symbology, have passed down the stories of our ancestors and our enemies. And at their most powerful, their most complex, this is exactly what videogames are doing. Games like Journey and The Banner Saga, among many others, hand down tales of the rise and fall of empires and the demise of tragic heroes. The two media mimic each other. Two-dimensional side scrollers are essentially moving tapestries that you can run through. Imagine climbing through the woven threads of the French “Apocalypse Tapestry.” You are the Fourth Horseman, and you have come for humanity. As Vermeulen pointed out, the art styles of days gone by are a goldmine.

Two-dimensional side scrollers are essentially moving tapestries that you can run through.

McGibney, Apotheon’s primary artist, saw the connection as well. “It works perfect for a platformer, because it’s side-view and everything. And Greek mythology itself, it sounds like a game. You have random gods just appear out of nowhere and saying ‘You need to complete these objectives!’ It’s just so…game-y, I guess.”

And at least when the gods command you to do something, you’re less likely to question their reasoning. “Why?” “Because I said so.”

The gods and goddesses all have their place in Apotheon too. Quite literally. The sections you encounter are assigned to different deities. And color, and the atmosphere it creates, begins to play a huge role as you move throughout the game. Which, when your inspiration is black-figure pottery, is a much bigger deal than you might think.

Because black-figure pottery is what it sounds like. Simple, character-driven artwork done solely in black on a red-orange pottery background. The black figures themselves were actually a slip that was affixed to the clay, and the artists added lines and detail by making incisions on the slip. When the vase was fired, the slip turned black and the rest of the clay remained the same. Red-figure, however, completely negated the need for the slip and allowed innovators to simply use a brush to draw their subjects’ garments, anatomy and facial expressions instead of painstakingly making tiny incisions to add detail. So as artists began to realize the potential for design that red-figure could provide, the black-figure style began to die out.

But McGibney and Vermeulen found it a much more forgiving medium to work with.

“Black-figure is a lot simpler. In the really, really early ones they’re almost cave painting looking. Really bad scribbles,” he said. “And then by the time you get to red-figure it starts getting really complex and quite beautiful. But most of our stuff is based on earlier Greek art. Which, I think works better as a game medium. Because for us everything that’s solid is black. And that works better as a positive space as opposed to the negative space of red-figure pottery. Which is a kind of…it works on a pot but I don’t know how well it would work jumping around and platforming.”

Red, however, wasn’t going to work as a backdrop all the time. There’s only so much you can do, so many moods you can create, with the reddish orange tint of fired clay. So the pair played around with colors, giving Hades’ Underworld a very moody and creepy blue. Likewise, Artemis, the well-known goddess of the hunt that Homer described as “Artemis of the wildland, Mistress of Animals,” gets her own brilliantly green forest full of life. It’s a departure that Alientrap makes from the traditions of Greek art, but one well worth risking. When your characters bear as much of a resemblance to each other as they do in Apotheon, some difference is necessary and welcome.

But don’t hold their similarities against them. The characters of Apotheon are beautiful. Drawn with simple lines, they move with a fluid grace for something that looks so rigid. They give the impression of having certain joints locked in place, like their ancient counterparts, only this time they have been given the freedom of movement. They are the amphora come to life and out for blood. And while McGibney admits that some of that is due to limitations of the animation system, it works so well with the art style that the restrictions they encountered are downright invisible.

They are the amphora come to life and out for blood.

Apotheon has been a long time coming. Interviews dating from October of 2012 can be found showcasing Vermeulen and McGibney’s hard work. They don’t have a release date in mind, but what they do have is a content completion goal that is rapidly approaching. It’s something they’ve said they are dying to reach—to finally be able to then have a closed beta and let people explore the world they’ve created, and to polish and tweak things until they’re ready for release.

“It really needs to be a full experience.” McGibney said, “You can’t have a half-done game. I mean, I am already getting emails from people complaining about how long we’re taking. So I kind just wanted to say that this is something that requires a lot of balance, and a lot of time pretty much. And yeah I think we have had the luxury of taking our time and getting it right.”

The end result will be the chance to show off what they having been laboring over since Capsized, a richly detailed world that appears very much alive despite having it’s roots in a long-dead society. McGibney and Vermeulen have found a way to bring ancient art into a brand new medium, and recreate the mythology that we all thought we knew. And while we know these stories have been around for millennia, told and retold again, Apotheon could make us believe they thought it all up on their own.