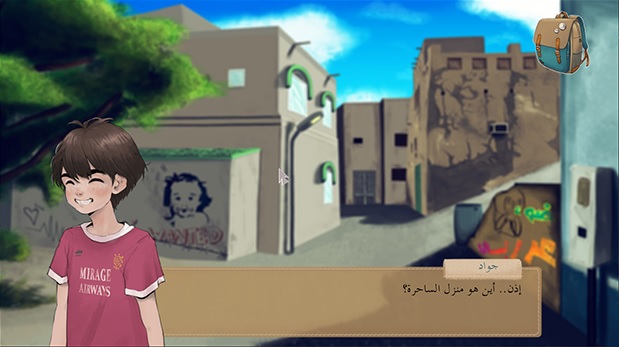 Based in the small town of Qatif, Saudi Arabia—”on the shores of the Arabian Gulf”—Light Studio is a team of five women who are currently making their first videogame. Leading the team as director, writer, and programmer is Fatimah Aldubaisi. The rest of the team all works on the game’s art and animations, comprising character designers Hameedah Hamadah and Zainab Aljishi, and background artists Lalyla Aldubaisi and Zainab Abu Abdullah.

Their game is called Wojdan (Arabic for the soul or inner strength) and it’s pitched as an “Arabic visual novel” on account of its text and dialogue all being in Arabic—an English and French version is also possible. “We hope that by doing this, we can celebrate our language and its beauty that is often overlooked in videogames,” the team told me. “We also hope that this choice will attract an audience that is usually not interested in videogames.”

I asked Light Studio how they felt Arabic has been treated in videogames up until now, to which they replied that it’s “overlooked” and “unusual” for videogames to include it at all, “even among Arabs themselves.” In their experience, if you scroll the list of supported languages in a game, Arabic won’t show up most of the time. “The only game that comes to my mind that adopted the Arabic language is Tomb Raider (the 2013 version) and I personally think that is a disappointment,” Aldubaisi said. “If done right, companies will really benefit from adding Arabic to their games especially games that are aimed at children.”


But it’s not just the lack of their native language that Light Studio sees as disappointing in videogames, as their culture at large suffers the same poor representation—”either it is missing or is represented in a wrongful stereotypical cringe-worthy way.” This is something else that Light Studio is hoping to do better with Wojdan.

The game follows an 11-year-old boy called Jawad who is suffering from an illness for which he is seeking a cure. That serves as the game’s driving force as Jawad, his father, and his sister all set out from their small village to hopefully find a doctor in the city that can save his life. The whole game, including its characters, plot, and setting, is inspired by the people and environment that surrounds the members of Light Studio.

“It is a story set in this modern age that follows an Arabic Muslim family in an Arabic Muslim society,” they said. “The women in the game wear Hijab when they are out and about, the men might wear Thobe (traditional Arab clothing), and there might be a glimpse of a mosque in the backgrounds.” However, to that last detail, Light Studio added that they don’t intend to make the game heavy with religious themes as they want it to be accessible and relatable to as many people as possible, no matter what they believe in.

“But we also want people to understand our culture from our point of view instead of the stereotypical picture of us that is depicted in the media,” Aldubaisi said. At the moment, Wojdan is up on Indiegogo where the team is looking to raise funds to make the full game. You can secure yourself a copy of the final game for just $5.

You can support Wojdan on Indiegogo and visit Light Studio’s website for more info.