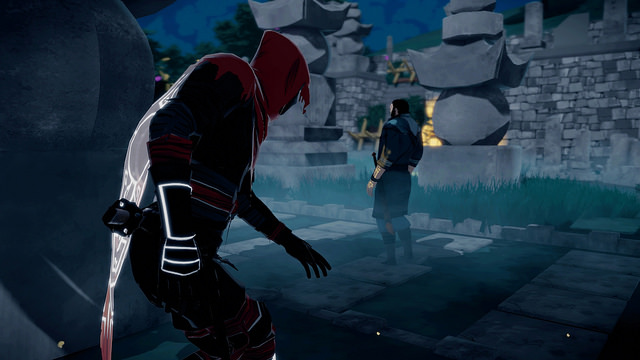 The darkness is scary. We’ve been fighting back against night and shadows since prehistoric times. It’s a fear that horror movies and novels have preyed on for decades; the dark room, the claustrophobic shadows where unknown horrors lurk, are often more dread-inducing than the monster itself.

In Aragami, you are the monster lurking in the shadows and the darkness is your weapon.

Well, more specifically, you’re a summoned otherworldly assassin with the power to bend the shadows to your will. Last time, we wrote about the game, it was known as Twin Souls; two years and a failed Kickstarter later, Aragami is coming to PC and PS4 next month, evolved greatly both in action and in looks.


Inspired by the classic Tenchu games, Aragami follows the titular undead assassin as he sneaks and eviscerates his way through patrolling guards to reach Kyûryu fortress and discover forgotten secrets about his past. To that end, Aragami empowers you with ability to master the shadows, teleporting between spots of darkness, creating your darkness to hide in or swallow corpses, create decoys, turn invisible, and unleash lethal shadow projectiles.

The darkness is your weapon

Your mastery over darkness offers the ultimate advantage for both those wishing to creep through areas unseen and unknown and the more ruthless players for whom the shadows are means to ambush and eliminate enemies. These feats of shadow-aided infiltration are presented in a vibrant cel-shading, giving the fortress grounds, your assassin’s crimson garb, and starlit sky a vibrant stylized appearance.

Aragami is coming to Windows, Mac, Linux, and PS4 on October 4th, with new game modes and features planned post-launch. You can learn more about the game and creator Lince Works here.