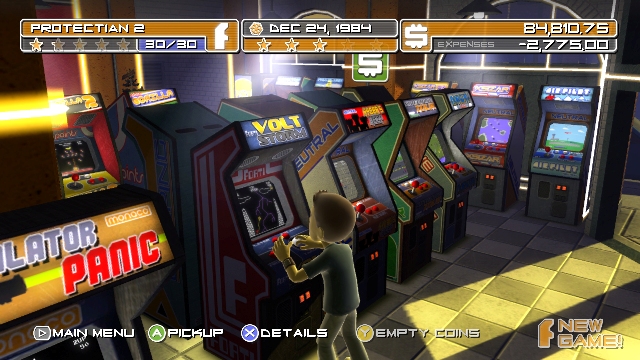 New mediums spend their early years as platforms for what hasn’t yet been possible, gathering material from the unsatisfied impulses of their creator’s brains. Eventually, with enough time and accumulation, the material echoes its very creation. Arcadecraft, a new indie game on Xbox Live where you manage your own neon-piped gamecenter, taps into a nostalgia and hindsight that could not have existed thirty years ago.

Why does this bode well for an industry at the brink of transformation?

Along with titles like Kairosoft’s Game Dev Story, which had you micromanaging the efforts of a development studio, a pattern is emerging that solidifies the industry’s maturation to the point of reflexivity. The game’s no longer enough. We want to play with the idea of games, the very fact and problem of their production.

Once a new medium is established and enough time has passed, the very act of creation becomes the inspiration for more of the same. And so we see films like Francois Truffaut’s Day for Night, about the production of a film, or a book like Vladimir Nabokov’s Pale Fire, about the editing of a book manuscript.

Quick reality check: Let’s not compare the work of Firebase, Arcadecraft‘s developers, to those titans aforementioned. But there’s a sapling of the same impulse at work. Any culture needs a fertile base before its producers can till the ground on which they stand. The very concept of a game about making a game, or about managing a play-space, will not form until these concepts are a given. Only then have motifs and trends built up to the point where interacting with them isn’t an isolated act, but instead a manipulation of collective memory.

Game Dev Story‘s sequence of more and more powerful consoles only exists because we’ve gone through seven-plus generations of hardware. The “Uranus by Senga” means nothing by itself; knowing it apes the Sega Saturn gives players a jolt of recognition. A medium’s steady growth over time gives producers and consumers a shared lexicon. When Kairosoft named Intendro’s last console ‘Whoops’ it did so knowing the Wii was a failed experiment in many gamers’ eyes, or at least a surprise phenomenon. That decision doesn’t exist in 1983, the year Nintendo released their first console in Japan.

A medium’s steady growth over time gives producers and consumers a shared lexicon.

Just as Arcadecraft can’t exist until now, even though the game sets you down in 1980. You’re tasked with stocking a dingy bare room with those clunky, beautiful cabinets of yore, each with familiar tropes–the sit-down racer, the glass tabletop two-seater, the many stand-up cabinets with joysticks and buttons. You set criteria just as in any management sim, like cost, and hours; you choose which games to buy, which to sell, which sequels to carry. You collect coins and dissuade players from throwing tantrums, thereby breaking your merchandise. Essentially you try and make money.

The dirty secret, the one we all know, is that there is no happy ending: The industry eventually crashes, in-game just as it did in real life, and your arcade will be sold off for some discount shoe store or big-box chain or Jewish deli.

But if arcades still existed as they once did, Arcadecraft wouldn’t exist, either. (A trade-off I’d take, but that’s another story.) Such reflexive, inward-peering games show signs of an evolving medium, shifting from one phase to the next, able to respond to the past because now there is one. What future titles will illuminate our present moment? We’ll have to wait and see.