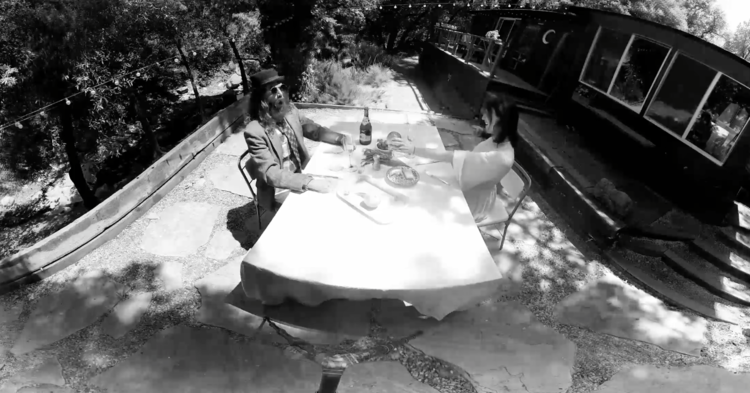 Clocking in at a brisk 90 seconds, The Archer reimagines the aesthetic of early silent films for the VR era. It tells the story of a man who visits a female archer for lunch. She goes all William Tell and persuades him to balance an apple on his head that she can use for target practice. I won’t spoil how that works out for the man, but that’s all there is to this story. Move on folks, nothing to see here.

Not that you’d want to see anything else. The Archer takes advantage of VR’s z-depth as an alternative to stereoscopy, but is filmed in black and white. It uses technology as a means to its particular ends and makes no attempt to show off all that the technology can do. To that end, Kantor’s film makes no effort to go far beyond the viewer’s peripheral vision. Its shots are clearly framed and envelope the viewer without requiring constant, speculative head movement.

Down with speculative head movement!

Rather, in order to indicate when the viewer should move her head, The Archer resorts to an old-fashioned cinematic trick: intertitles. As in traditional silent films, Kantor’s intertitles substitute for dialogue. But they also perform an original function, displaying arrows that direct the viewer’s head to the left or right to see the next scene. These gaps and instructions further demarcate segments of the story, establishing a unique rhythm and also ensuring that the head-spinning quality of VR cinema actually has a narrative function.

When they were originally introduced, intertitles compensated for the things film could not do. Film is now a more complete medium—dialogue and colour are the most obvious changes—but The Archer’s intertitles still exists to fill in its blanks. Judging by The Archer’s fellow entries in the Kaleidoscope VR Film Festival, directors have yet to figure out how much you should have to rotate your head when watching a VR film. The technology allows for plenty of horizontal and vertical scanning, but does not always provide clear hints to the viewer. Framing is still useful in VR, but it is harder to pull off when, as Samsung puts it, you can experience the world beyond your peripheral vision. So Kantor, like early silent filmmakers, has provided added hints, a user guide of sorts. Here’s hoping these hints will not always be needed.

In the short term, however, The Archer is a joyful revelation.