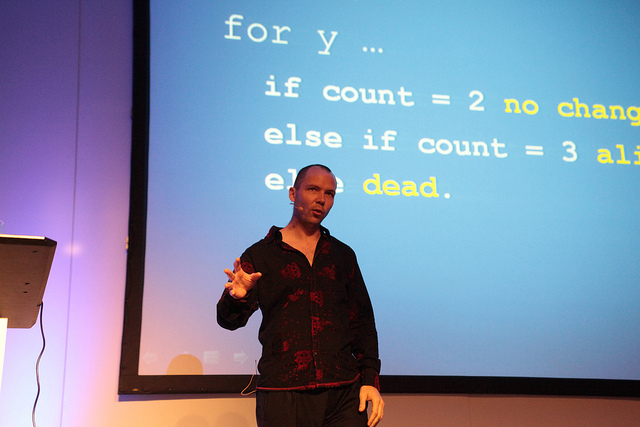 Jonathan Blow, the creator of the allegorical Braid, a game-changing platformer about rewinding time, thinks that some games are evoking the cookie-cutter mentality of terrible television of yesteryear.

In a talk titled “The medium is the message,” given at Creative Mornings, Blow summoned the spirit of Marshall Mcluhan, saying that the format of social and casual games necessarily results in bad games.

“It’s not an accident that we have better TV today than we had in the 70s and 80s, because there was a structural change,” said Blow, siting the evolution of stale dramas to higher quality TV shows like Game of Thrones, Deadwood, and The Sopranos. The reason for this change? Networks changed the traditional model of structuring the narrative around commercial breaks, ditching the cliffhangers and dramatic scenes designed to keep the audience tuned in through the commercial break.

The problem with syndicated shows is that if you’ve seen one, you’ve seen them all. “There are no stakes. The episodes are interchangeable. There is no truth to it. Because nothing is on the lines,” said Blow. i.e. Captain Kirk will save the day.

“You stop treating the audience like your friend. You’re manipulating them,” he said. While television is figuring things out, with the explosion in popularity of social games, the game industry could be heading down that path.

“When you talk to game designers about this, they’ll often be in denial…. It’s obvious to anyone who actually looks that the form of what you’re making dictates what you can actually make,” he said. “The shape of a container determines what can be contained.”

Blow goes on to say that games with critically-acclaimed narratives, like The Fullbright Company’s Gone Home, would be an impossibility in the social game model. “It’s about caring about the characters. It’s about personal issues. [If it were free-to-play], it could no longer be a two hour game. It has to be infinitely long. It couldn’t be a story about a family anymore. At some point it gets impersonal,” he says. More personality, less infinity sounds like words to live by to me!

You can watch the talk in its entirity on YouTube.