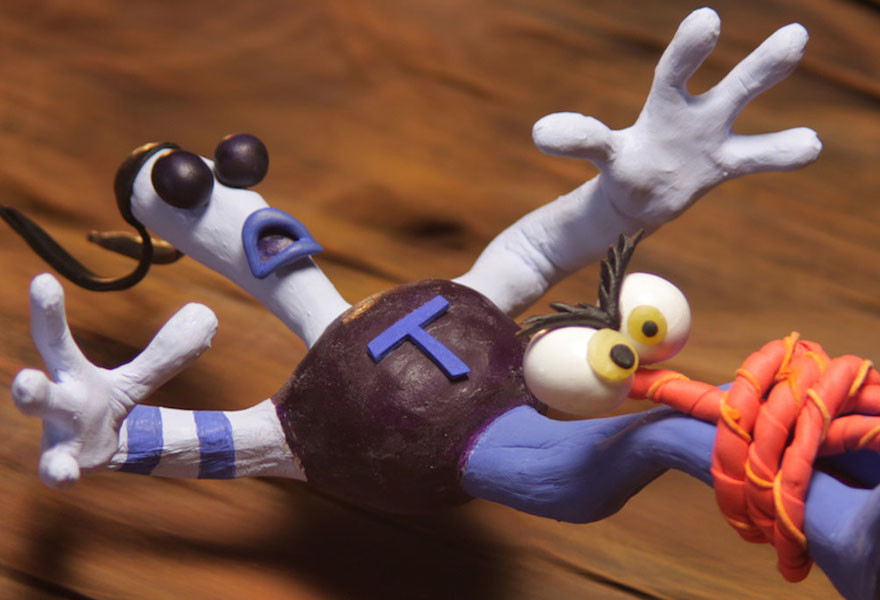 Skullmonkeys was a weird sequel to The Neverhood. Taking a lonely, surrealist, clay-animated point and click adventure and reworking it to be a frantic, though relatively basic 2D platformer was an unexpected transformation. The two games, released in 1996 and 1998, respectively, were unmistakably in the same family, with the same characters, same levity, same poop jokes, and same creator, in designer Doug TenNapel. Even if Skullmonkeys lacked all the muted mysticism of The Neverhood, it was a smörgåsbord of charm. Turning a puzzle game into an action game isn’t exactly a commercial risk, but it’s at least a different game. In that vein, Armikrog is the boring, belated sequel to The Neverhood that Skullmonkeys declined to be

There’s always a benefit to the real. I saw this summer’s megahit Jurassic World and the recently rediscovered Roar, in which director Noel Marhsall endangered his entire cast and crew with the presence of actual fucking lions, in the same week. While Jurassic World is the better movie (a terrible movie that is better than Roar), I felt more engaged with Roar. In one film I was watching CG reptiles tear up a CG resort, and another I was watching real humans fear for their safety against a drove of untrained big cats. I am not advocating risking the safety of Melanie Griffith for the sake of making your audiences squirm, but I am saying human perception has a natural instinct to tune out illusions. Any movie about rendered action figures bopping each other will lose its allure over time. The ‘90s had plenty of out-there adventure games, but only The Neverhood had a literal sense of volume. It was a real place.

This was the hook to videogame claymation. The only physical, malleable material that could be constructed and utilized for interactive worlds. Though not as inherently goofy as FMVs, it was still mostly tacked to undercooked games with telling names like ClayFighter, Claymates, Platypus. The Neverhood is the game that cared about its craft as animation and as a game, and has stuck with its cult audiences deservedly.

The Neverhood was a biblical Oz. A Genesis story in the void, a floating kingdom with walls, dangers, rooms, radios and switches. Few of the puzzles were tricky, but they often relied on grasping a sense of the realm’s aesthetics—you had to feel familiar with the zany cryptic logic to play along, like Sworcery or Hohokum. Many mechanics transformed the world, its rooms and platforms. Entire boroughs of The Neverhood shifted and clamped on to another, and even if this entire universe fit on a table in a Dreamworks funded studio, you could feel the weight of the clay on the other side of a computer monitor. Moreso than many games before or since, you felt the reward of physical cause and reaction.

I loved the first-person segments where you just walked around, turning the camera to see walls and shapes, noises echoing from the nameless distance and the starless veil of darkness that wrapped around you. Armikrog never reaches those peaks—it never feels like that snowglobe, because it seems to see its world as something to merely travel through, not appreciate.

Armikrog is about an astronaut who looks identical to The Neverhood’s Klayman, but with bug-eyes instead of coin slots and a do-rag instead of a pumpkin stem. He has a scouting mission similar to the one Matthew McConaughey undertakes in Interstellar, and he constantly encounters ants dressed like American presidents. It all looks great: the picture and animation quality, the rainbow of materials more crystal than a set of 1990s CD-ROMs could mustre. You get an interesting neural kick whenever you see human fingerprints along the surfaces of a space cavern, like cave drawings of the hands that had once been there. There’s a bit of material brick-a-brack used in this new game that wasn’t really explored in The Neverhood—cardboard, fuzz and marbles. You can see the unexpected influence of The Neverhood in more recent games like Littlebigplanet, The Swapper, and all those games starring or somehow made out of balls of yarn.

But in Armikrog, the craft never rewards itself. It almost seems disinterested, which I know can’t be the case. I’m aware backtracking has become a taboo over time, but when exploring was its own reward it wasn’t so bad to see the same world from fresh angles. Armikrog has only one perspective—the 2D plane—and you walk in a straight line through it. The multiple segments feel like deja-vu. The Neverhood’s puzzles weren’t the most captivating, and if tile-puzzles are a sin then both games are guilty, but Armikrog’s the bigger sinner for shamelessly repeating them. You will have to re-assemble a baby mobile multiple times. You will have to separate your sassy dog, Beak-Beak, to speak with a squid, multiple times. The second time you encounter a rotating room, there will be no puzzle related to the room’s rotation. Zany isn’t as zany on second viewing, and for a game that comes so long after its predecessor it’s shocking how few new ideas have been introduced.

Armikrog squanders the real, doing nothing interesting with its sense of space and temptation to explore, because every new chamber seems identical to the last. In fact, if The Neverhood has a sequel, it may be 2003’s Samorost, from Amanita Designs—a precious cosmos of tinkering little mysteries. By the time it’s done, Armikrog feels more like The Neverhood’s mulligan. As if this is the first one, the prototype, the do-over, with less to offer than familiarity, all of which leads to the more lavish incarnation made nearly two decades ago. And after that loses steam, and you want a bit of action in your life, then you make Skullmonkeys.