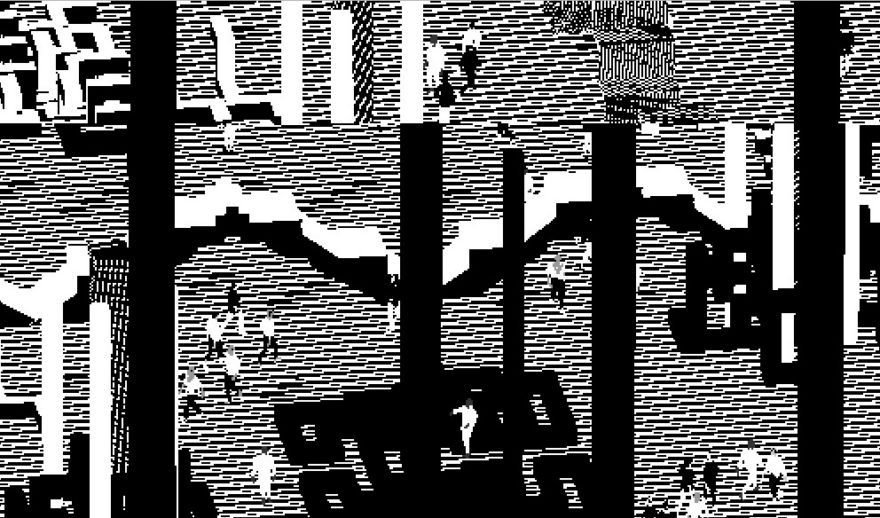 The wonderful opportunity of videogames for an architect is that they allow for the creation of structures impossible to realize in the physical realm. Sure, for many years, pen and paper has offered the same deal, but not quite. Software lends itself to a virtual space that can be freely explored from different angles, and it has systems that allow for easy tweaking of any architectural arrangement—the possibility of stretching a series of buildings into infinity seems that much more plausible in virtuality.

Peter Burr, a New York-based artist with a keen interest in creating spaces of performance through animation, is very much into the infinite architecture of videogames. This year, that interest led to an installation called “Pattern Language” that was showcased on multiple connected screens across the walls of 3-Legged Dog in New York between September 25th-29th. The name of the exhibition is taken from the term coined by architect Christopher Alexander to describe “the aliveness of certain human ambitions through an index of structural patterns.” The curators of the installation add that the design approach Alexander refers to has been claimed to allow for ordinary people to “successfully solve very large, complex design problems.”

Burr’s installation reflects its titular term through videogame software, creating a world that he describes as “an endlessly mutating death labyrinth” that viewers could peek into. Realized in Burr’s signature black-and-white pixels (as seen in projects like “The Mess”), the criss-crossing pillars and walkways of the city in “Pattern Language” seem alive, writhing with unstable animation. Oddly, the people strolling around inside seem to be less active (or more stable) than the patterns they step across, which constantly fidget with an electronic energy. It’s something that’s perhaps best described as a “video environment,” as 3-Legged Dog called it.

While you have unfortunately missed your chance to see the installation in person, you can stare longingly into the GIFs above and below, which we can all thank Prosthetic Knowledge for providing. But that doesn’t have to be the limit to your interaction with this installation, as 3-Legged Dog mentions that it’s being turned into a videogame with the support of Creative Capital and Sundance. Make sure you keep an eye on that to arrive—we certainly will be.

You can find out more about “Pattern Language” on its webpage. Check out Peter Burr’s website for more of his work.