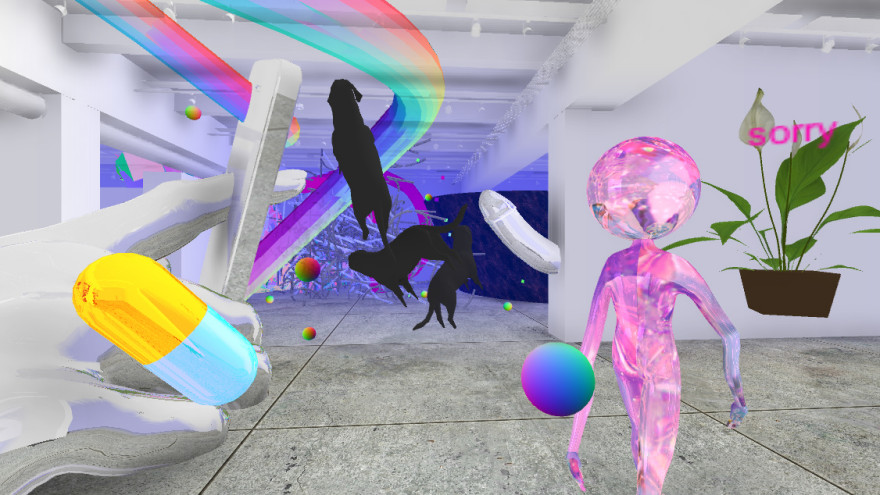 If, like me, you’re one of those horrible twenty-something millennial adult-babies ruining the world for everyone else, you’ll probably feel at home inside UCLA’s (unofficial) virtual exhibition space, the “New New Wight Gallery.” Based on UCLA’s real life New Wight Gallery, the online-only exhibition space is imagined as something of a 2.0 version that forgoes the typical barriers of logical, physical space.

As curators and MFA candidates Julieta Gil and Theo Triantafyllidis explain, though the IRL gallery is “a well-equipped space for us students to present our work to the public, sometimes the confines and scale of material space can feel intimidating for digital works.” Stifled by additional constraints like “a strict set of rules, tight schedules, and some bureaucracy,” the two felt more interactive-focused artists deserved an outlet garnered specifically to their medium, that would also give them a “more casual, and self-organized way” to show their work.

Thus, New New Wight Gallery was born: a virtual art space where anyone could submit a digital file (like an image, movie, 3D object) for consideration. After gathering all the contributions, Gil and Triantafyllidis experimented with each piece, messing around with their position, scale, weight, and orientation, “but mostly focusing on how the pieces interacted with one another to create an ever-shifting experience for the viewer.” Though most submissions came from Design Media Arts grad students, the opening exhibition in New New Wight Gallery, entitled the gallery is naked, presents viewers with an overwhelming diversity in form, content, and taste.

“New New Wight was envisioned as a space that challenges conventional forms of art,” Gil says. “Virtual space contains no rules. Gravity can disappear, objects can penetrate into each other and space can expand or contract. We asked ourselves what kind of art would exist if no rules were necessary?”

“Chaos is a big part of it,” the two curators admit. “One of our intentions was to give this exhibition the wildness of the internet—at least the internet as our generation perceives it.” By remixing the interactive pieces into a bombarding mashup of sensorial stimulation, they hoped viewers would “question the boundaries of individual creation, and see the whole exhibition as a single living work of art.”

The gallery is naked certainly stirred some ‘internet millennial feels’ in me. Walking around it seemed akin to what I imagine watching HBO’s Girls on an acid trip would feel like: anxiety-producing, yet also somewhat sensational for it. For example: after turning the corner into the gallery for the first time, I immediately came face-to-face with an enormous, shimmering wall-penis. Many other distractions surrounded this flailing wall-penis, like a pack of physics-defying Bernese mountain dogs and what appeared to be a pair of jungle gyms on crack.

But I only had eyes for the restless, metallic dick mounted on the wall. I found my fascination wasn’t overtly sexual, either. The writhing monument reminded me of an actual, real life penis statue that had been erected outside the visual arts building at the (nearly all female) Bennington college during my junior year. I often looked upon that dick monument while walking back to my dorm following a particularly stimulating class, my mind swirling with existential excitement. Something about that whirling penis display in the gallery is naked encapsulated that experience. And, for some reason, it made me want to cry.

A lively penis-wall exhibit could only exist in something like the New New Wight gallery. As an “open space intended to allow student initiatives to show work under their own rules,” Gil and Triantafyllidis hope to expand the scope of future exhibitions. Following the June 4th opening of the gallery is naked, the curators published each contribution file to the public for further experimentation. They want others to host their own version of this exhibition, with their own remix. A couple of the tools available for poetential new curators include: a set of pills with special powers by Adam Ferriss, and a whole secret bonus level by Alex Rickett and John Brumley.

You can visit the New New Wight museum yourself, on browser, Mac, and Windows.