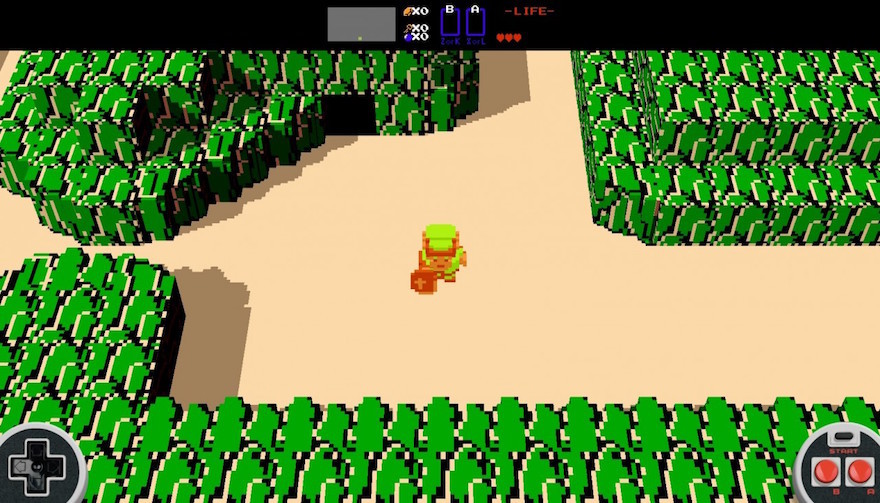 On February 21, 1986, Nintendo’s The Legend of Zelda was first released in Japan. This week, to celebrate the game’s 30th anniversary, series fans Scott Liniger and Mike McGee took to browser to release a complete 3D remake of the first game titled The Legend of Zelda: 30 Year Tribute. Unfortunately, Nintendo has since pulled the project, but what’s notable about it is how it used voxels to make the familiar world of a decades-old game feel new again.

Short for “volumetric pixels,” voxels are an oft-forgotten method of rendering 3D worlds that have nonetheless been making a comeback as of late. As explained by Kill Screen founder Jamin Warren on PBS Game/Show, voxels are essentially pixels with depth, small cubes placed together to create detailed, though often blocky, 3D graphics. Because this requires more processing power than polygons, which are small planar shapes that come together to create objects, voxels ended up falling into obscurity while the polygon became the game industry’s primary way of creating 3D games, similar to how the cassette beat the 8-track.

As computers have become more powerful, however, the voxel has seen a small resurgence, most notably in popular block-building game Minecraft (2011). So when Liniger and McGee set out to recreate Zelda in 3D, the blocky nature of the voxel proved a perfect way of recapturing the nostalgia of the original game’s pixel aesthetic. It’s a technique that resembles Silicon Studios’ PlayStation 3 game 3D Dot Game Heroes (2009), which also used voxels to pay homage to the original Legend of Zelda.

Beyond Zelda, though, programmer Trần Vũ Trúc has set out to voxel-ize the entire Nintendo Entertainment System library with his browser-based 3DNes emulator. Using actual, original game files, the 3DNes emulator is able to extrapolate the pixel graphics of old NES games into voxels, rendering them in 3D for an effect that looks something like a diorama. This includes the original Legend of Zelda, of course, but because the emulator doesn’t build these games from the ground up like 30 Year Tribute or 3D Dot Game Heroes, its results often look more rough. Still, as the project is currently in beta, certain hiccups are to be expected. The 3DNes emulator only works in Firefox at the moment, but it serves as another example of fans using voxels to make the old seem new.

Outside of games, however, businesses are using the aesthetic of the voxel to make the new seem old, hoping to appeal to their customers’ sense of nostalgia. Drive-in chain Sonic, for instance, has recently taken to Instagram to show off a series of new cube-shaped milkshakes that are currently being developed exclusively for the Coachella music festival. Looking like they came straight out of a Minecraft power user’s kitchen, the cube milkshakes are being designed with help from Instagram user Christine Flynn, who has a history of dressing up everyday food to look fancy. Despite offering less milkshake than a traditional cup, these cubes offer a novelty that at the same time harkens back to childhoods spent exploring blocky worlds.


It’s difficult to reconcile the idea of novelty and nostalgia, with the former representing the new and original and the latter representing the old and fondly remembered. But voxels allow artists to keep one foot firmly in each camp, harkening back to the pixel aesthetic of youth while also capturing the depth and clarity of more modern projects. As such, the once overlooked aesthetic of the voxel is emerging as a powerful way to bring the comfort of youth into adulthood.