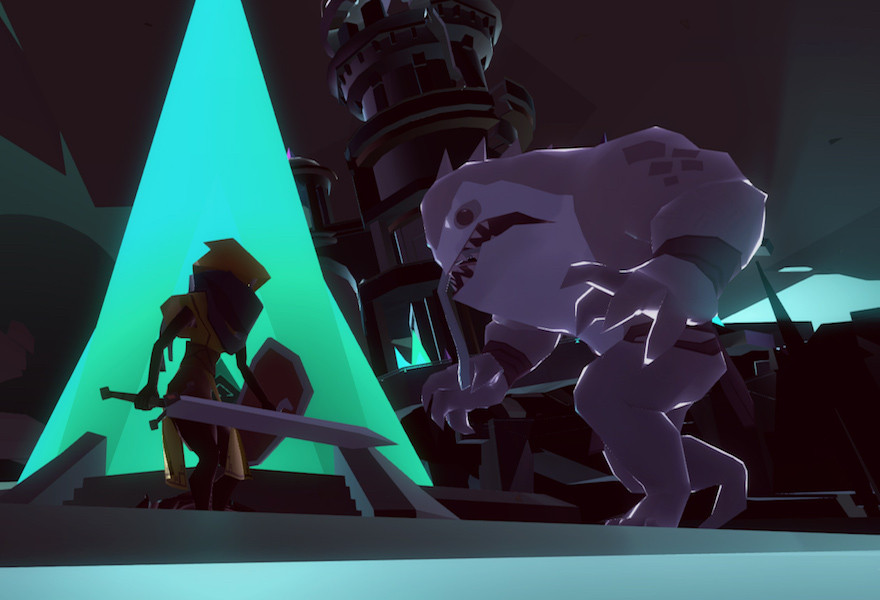 It is well-known that upcoming dungeon-delving game Necropolis looks ludicrously stylish. Its stark angles, moody lighting, and cartoonishly exaggerated characters give it an aura that lies somewhere between art deco and fairy tale; as if Red Riding Hood were the emcee for a big-band show. It’s a striking aesthetic, and it does an admirable job of setting Necropolis apart from the gothic horror of its major influence, From Software’s Dark Souls (2011).

However, part of what’s allowed Dark Souls to be so successful is its memorable cast of baddies, their gruesome appearances helping them to linger in the minds of its players. Necropolis, too, is looking to make an impression with its own cast of foes, albeit in a more lighthearted way better suited to its unique look. In preparation for the game’s March 17th release date, Necropolis’ art director, Chris Rogers, recently sat down with the game’s artists and animators to talk to them about the creatures they’ve designed and ask which are their favorites.

Most popular was the game’s Gemeater enemy, which looks like what might happen if someone tossed a street shark into a gladiatorial arena. “It was really fun to create concept variants for him because of his comical look,” says artist Fiona Turner. “His large head, vacant stare, and reckless attacks contribute to his appeal. I imagine he has a peanut sized brain and has only survived the Necropolis long enough to meet you due to his brawn.”

“So many things in the Necropolis are calculating, thoughtful and deadly,” elaborates animator Hollie Mengert. “But the Gemeater survives by pure brute strength. I love seeing him thunder his way around the Necropolis.”

Meanwhile, animator Brigittie Tijerina talks about the unexpected horrors of the Eel Trap. “Animating it was so fun and its movement reminds me of a dog shaking prey in its mouth,” she shares. “Also, because the lair in which the Eel hides blends with the environment very well, it startles me every time it pops out.”

Animator Jakob Zoepfl opts for the Changeling as his favorite, “Mostly because it’s rarely seen and it was super fun to make. It moves very fluidly and its long gangly limbs make for some interesting shapes and poses.”

Whereas character artist Marian Huber favors a friendly coward rather than a deadly enemy. “My favorite critter from Necropolis would have to be the Chemist, our cowardly, bird-brained merchant,” she explains. “It’s always funny when you open up a chest and finding [sic] him cowering in there, hiding from the horrors of the maze…I love how his animation really sells his bird-like and flighty movements, as well as his salesman attitude.”

Finally, character team lead Doug Magruder isn’t able to pick a favorite, likening the question to Sophie’s Choice. “Narrowing it down to one ‘favorite’ is like picking a favorite child out of your multitude of available children,” he shares. “All characters in Necropolis are special to me, from the lowly Rat King and Scrounges whose skittering movement and simple designs are endearing and pleasant…to the Hollowman Brute whose fierce aspect of a monstrous mechanical gorilla is carried brilliantly through his movement and mesh in equal measure.” He did admit, however, that “…the character that fills me with the strongest emotions is the Blackguard. It has gone through the most hands, had the most work done to it, the most joy and pain and heartache and triumph are present in that simple player avatar.”

We’ve already been impressed by Necropolis’ distinctive world, and now it seems as if the characters populating that world will be just as creative, and of course, stylish.

Rogers’ talk with the art team is the most recent in a series of behind-the-scenes updates as the team gears up for the game’s launch next month. To see the full talk and keep up with new posts, check out the game’s development log.