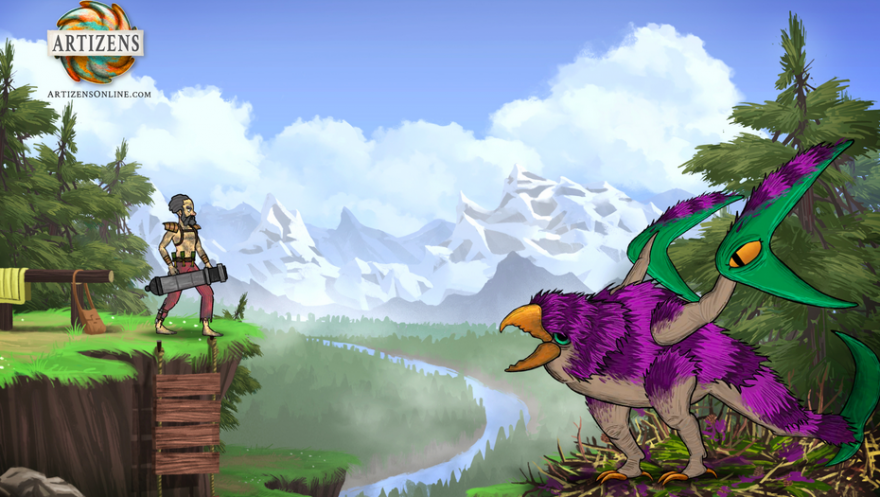 It’s becoming something of a familiar narrative – a bunch of game industry veterans get together and start working on a dream project. They realize that they have something exciting going for them – so they quit their jobs to focus their efforts on said dream project – and they launch a Kickstarter to make it all happen.

That’s the story behind Artizens, a wildly ambitious project that looks to support DIY artists and designers almost as much as the LittleBigPlanet series.

Even in its infancy, it’s looking good, combining elements of Monster Hunter along with an infinitely customizable crafting system (that allows players to design and draw their own gear), and wrapping it in an attractive hand drawn style. I would say it looks like Scribblenauts for wannabe artists, but that would do a disservice to the deep-looking combat system in place.

It’s an ambitious plan, considering the complexity (and customizability) of all the moving parts, but the funding goal is relatively modest at $30, 000, and the pitch and gameplay videos look fantastic.

The team has also put their due diligence into promotion outside of Kickstarter, with a robust blog and a fascinating AMA on Reddit regarding the game, the team, and their big plans.

Artizens, Inc. claims that the game will support a community of artists trading gear designs, with features that will allow for common sense and community-based policies regarding content standards. This is what impressed me most about the whole project, and what gives me faith that this game will support all forms of expression, no matter how potentially offensive or weird.

There’s a great deal of elaboration in the AMA for specific content-moderation plans, which all sound reasonable:

Instead, we have two features to let the community see what they want to see.

And this fan-friendly bit:

“We are going to handle copyright infringement the way that Youtube does — by removing the infringing content only when we are asked to by the copyright holder.”

Impressive. If the Artizens team can pull it all off – and they are admittedly promising a lot here – they will be the creators of one of the world’s most truly customizable, player expression-friendly games. At close to 90% of their financial goal with 18 days to go, they’re well on their way.