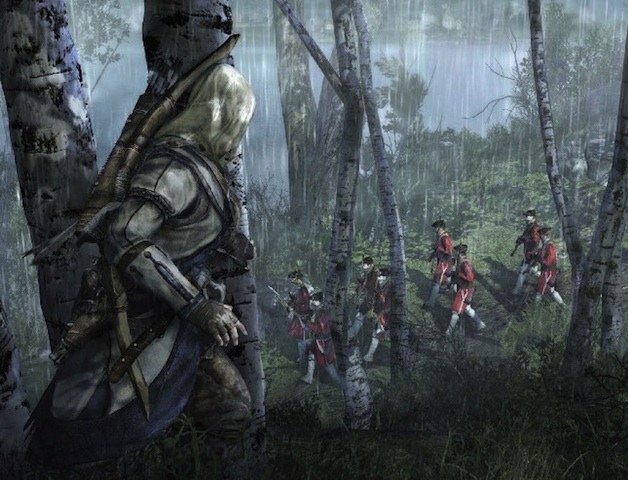 Over the weekend, The Writers Guild of America, who you may remember as the labor union responsible for the Hollywood writers’ strike a few years ago, got together to hand out some avian-shaped trophies for best screenplays, and as always they were amenable enough to include screenplays for videogames. While it’s great that games are being recognized alongside media like TV and film, what we were wondering is how the heck they decided that Assassin’s Creed 3, which spins a plodding colonial yawn, ehem, yarn, that lacks any scent of personality or charisma, was the best written game of last year.

It turns out the WGA doesn’t bother with actually playing the games, but makes its judgements based solely from reading a script that the author submits. According to Gregg Mitchell, a spokesperson for the Writer’s Guild, the scripts are submitted in “a reasonable approximation of a standard film or TV script format,” which I interpret as filleting the meat and sending the carcass their way.

This is a lamentable way to judge the merits of a game’s writing. One, who are these machines who can power-read through 50,000 to 100,000 words of stilted dialog and historical descriptions of the founders of Boston? And two, why even do it that way? The best-written games rarely play from beginning to end like movies, but offer us the opportunity to make decisions, interact, and, you know, do things. The story isn’t only the preconceived plot, but the way we play the game. Reading from a script overlooks the very important aspect of non-linearity.

So how does the WGA address a game that offers more than one possibility, which from our humble experience is all of them? “In the case of multiple story pathways, it’s acceptable to choose a single path for the submission,” says Mitchell. “In addition to the script, a story synopsis is required that describes the flow of the storyline and clarifies the game experience.” I imagine this is part of the reason two of the best narrative games of 2012, The Walking Dead and Mass Effect, weren’t even nominated for an award, while the flimflammery known as Master Chief’s internal dialog with an AI Tinkerbell from Halo 4 was given a nod.

Judging from the WGA’s list of nominees, which include 007 Legends and Disney Epic Mickey 2: The Power of Two, the Guild must be under the false impression that all game narratives are insipid Hollywood wannabes. Otherwise, how could Assassin’s Creed 3 be declared to have the best writing of games, hotel brochures, the fine print on a bottle of multivitamins, or anything? Our review was a diatribe against it.

The going gets so slow in the introductory first SIX HOURS, in which you play as a jowly Englishman sneaking around ridiculously in a tricorner hat and pantaloons, that you actually long for Desmond, the taupe hero of the frame story that has never remotely justified its existence and which I will not stoop to explain.

Yet the WGA has deemed it to have the most outstanding game writing of last year. I say heresy.