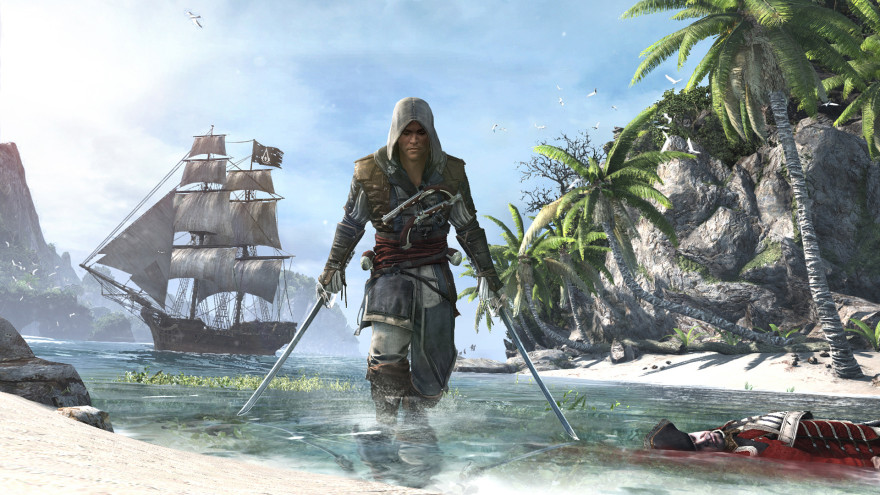 Let us meditate on the old videogame maxim:  Art is never finished, only abandoned (until Q3 with new multiplayer modes). The realities of walking the tightrope between art and budgets in the millions means making AAA videogame sequels involves more incremental fine tuning, sometimes on a micro scale, instead of radical reinvention. But this doesn’t excuse or separate it from art. Despite a yearly release, Call of Duty is still a vivid product and portrait of a country seized by paranoia. There is still craft in constructing a Madden game. Assassin’s Creed: Black Flag comes a year after Assassin`s Creed 3 and all it wants to do is talk about itself.

Black Flag is as much the game as it is about the game, and what it means.

The series has always been one to acknowledge its own status as a videogame. The original Assassin’s Creed was an elevator pitch: You play as an assassin running around the meticulously recreated, open world, Crusades’ era Jerusalem. But you were actually present day Desmond Miles, reliving his ancestors’ memories through a simulation in an attempt to uncover some Dan Brown-level plot involving ancient aliens and the war between capital-A assassins and Templars. It all started as a convoluted way to explain away the videogameness of the world. The interface and tooltips were just a part of the simulation. Killing civilians “desynchronized” you from the protagonist because he never killed indiscriminately. Certain parts of the city are cordoned off with a wall of glitches because they’re not in this particular memory. It was an idea that never went anywhere. Most people playing videogames are aware that they are playing videogames.

But Assassin’s Creed did well, so instead of an ambitious failure, it became a series. Not counting spin-offs and expansions and DLC, this is the 4th Assassin’s Creed game. We’ve gone from the Crusades to Renaissance Italy to revolutionary America and, finally, now, to pirates in the West Indies. You’re another man who must go through a boilerplate hero’s journey and become an assassin, and fight against Templars and weak men who stand in your way. The words “honour”, “loyalty”, and “order” come up a lot.

Any series that goes long enough has certain decisions reinforced through repetition, flaws turning into dogma. By now Assassin’s Creed has worked around its flaws: Black Flag has more things to do in the world, chests of buried treasure scattered around the world, or sea shanties waiting to be chased after and caught. The people are still lifeless, but the series now emphasizes architecture and scenery. You can parkour through the growing towns of Kingston and Havana, along with the super-saturated greens of jungles still untouched. The series’ commitment to stealth still seems like a sick joke—nothing about the series is subtle—but levels are designed to accommodate a broken system, with more easy spots to hide, more tools to use to distract them, and guards that are less persistent in their chases.

The closest the game comes to radical is in its nautical combat. It was an enjoyable, if repetitive, tangent in Assassin’s Creed 3 turned into a full-scale distraction here. Half of the game takes place at sea, piloting through storms and enemy blockades, and going to combat. The designers have balanced it so there are enough options to make ship-to-ship combat tactical and varied, but also enough speed to keep it from being a slog.

Throughout this game you’re pulled out and reminded that you’re playing a game inside a game. Desmond’s story ended at Assassin’s Creed 3, so now you’re playing as somebody who works for Abstergo Entertainment, the videogame division of a modern-day multinational company that is run by the Templars. Abstergo, like Ubisoft, released Assassin’s Creed: Liberation, and is based in Montreal—like Ubisoft. The Abstergo logo even comes up instead of Ubisoft’s when you start the game. The conceit is that you’re playing through the protagonist’s memories to gather sequences that can be turned into a PG-13 action adventure series for the whole family. At any point you’re allowed to stop playing the game within a game and wander in the ersatz Ubisoft. It seems like playful wish fulfilment, with fish tank walls and a 17-floor building in the heart of Montreal. We’ve seen these plays at meta, with games like Hotline Miami and Spec Ops: The Line chipping away at the 4th wall. Those games turn the mirror on the player to confront and provoke. “Aren’t videogames sorta fucked up?” they ask.

The designers of Black Flag ask the exact same question, but from a different direction. There are scenes where the COO is getting bitched at for being behind schedule. A file, obtained through hacking, shows a faux trailer for the game, unfortunately titled Pirates of Nightmares, that is awful in the way that videogame trailers are usually awful. The company is controlled by a bunch of evil executives out to rule the world, but most of the people in the office itself seem genuinely excited about making videogames. Another file is a doc discussing other possible time periods. There’s one that reads like a Ubisoft inter-office memo, about stretching the series into a tentpole with yearly releases along with DLC year round. 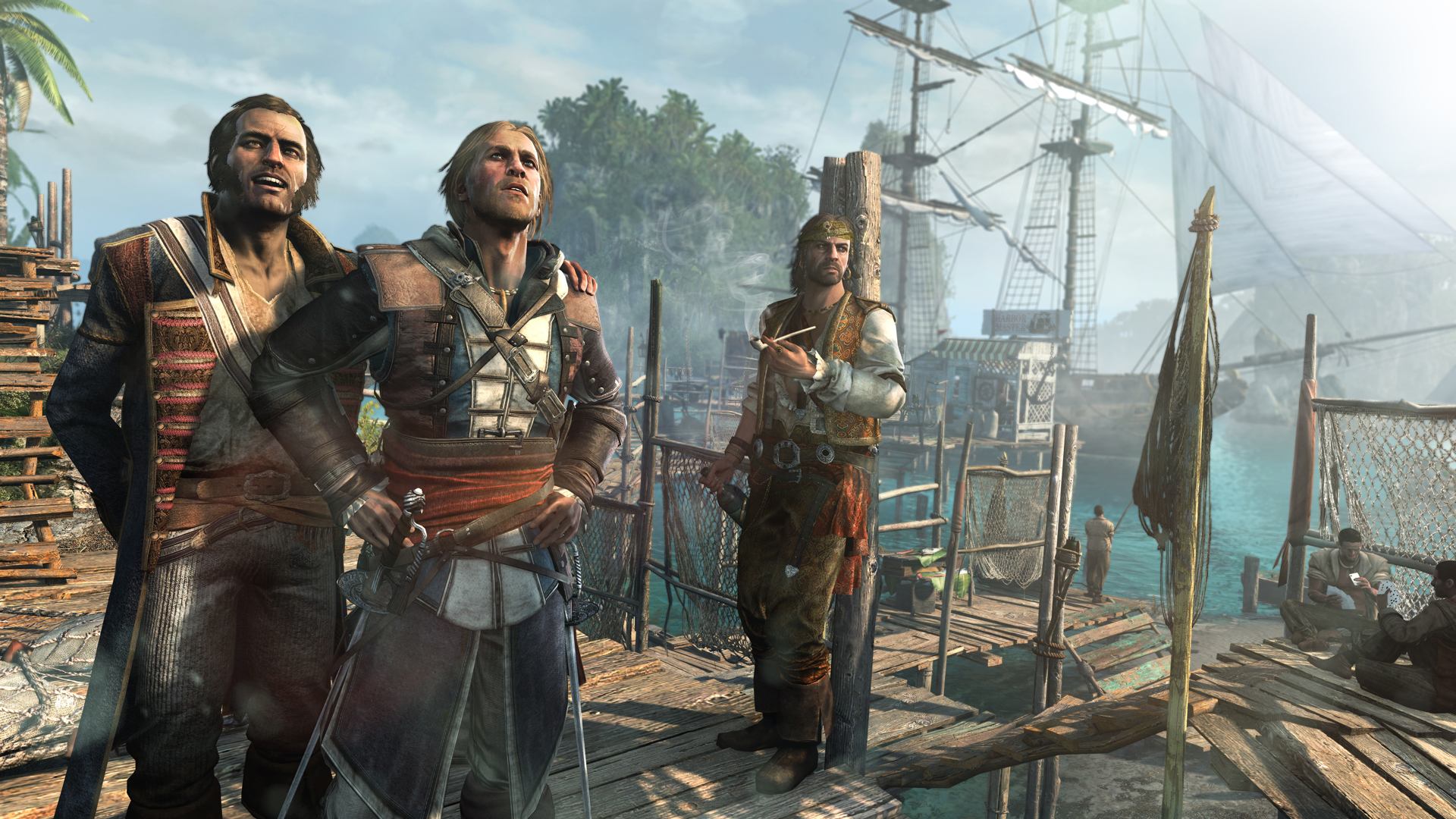 We’ve seen commercial pressure explored as part of a major game’s artistic content before. As in Black Flag, Metal Gear Solid 2 dealt with simulations within simulations and the push to make sequels. But Metal Gear Solid 2 was creator Hideo Kojima rebelling against fan expectations and commercial expectations, giving players exactly what they wanted—a retread of the first game—but undercutting it with a protagonist he knew players would loath. Black Flag ends up saying a lot of the same things, not to rebel, but to reaffirm.

Any series that goes long enough has certain decisions reinforced through repetition, flaws turning into dogma.

Black Flag still has all the old Desmond vs. the aliens hoopla kicking around, but it also seems to be openly admitting a slightly depressing truth: Ubisoft is a large entertainment company and Assassin’s Creed is a franchise that continues to exist so Ubisoft can continue to exist. Why? Abstergo’s executives want Black Flag to sell copies so they can make money, and so do Ubisoft’s. It doesn’t get any deeper than that, and there isn’t much pressure on the company to try to.

Black Flag is as much the game as it is about the game, and what it means. Assassin’s Creed is no longer a series. This game signals that it has, consciously, deliberately, become a franchise, something that is bigger than itself and something that exists, in part, to perpetuate itself.

Even the most radical departure for the series, the open waters, is a conservative, carefully planned move: the designers used the previous game as a backdoor pilot. Black Flag is the best version of the idea uttered into life in 2008, and next year there will be a new game in the franchise with a few new incremental tweaks that will be the best version. What can I do to get you into this 2014 Assassin’s Creed today? When many are struggling to talk about videogames as a medium, Ubisoft is talking about videogames on terms they understand: videogames as products.